As he writes in his memoir, the story starts with an armpit.

In 2002, Mike Evans, co-founder of Grubhub, was a restless coder at a tech company who dreamed of finding a better — more seamless, you might say — way to order food, specifically online. But he couldn’t find the motivation to actually do it.

“Plenty of bus rides home, I have thought, Hey, maybe this time I’ll start coding up a delivery guide when I get home,” he wrote in his new memoir, Hangry: A Startup Journey, released November 1 by Legacy Lit.

“But every time, that motivation has given way to reading a sci-fi novel, or playing Halo on XBox, or watching reruns of Buffy the Vampire Slayer,” he continued in the book.

Then, on a winter commute home in Chicago, he fell, nose-first, into a person whose armpit was decked out in “cool-fresh-evergreen deodorant,” he wrote, and it annoyed and grossed him out enough that he didn’t want to cook dinner. But he was also too irritable to order pizza. So Evans “open[ed] my laptop and start[ed] coding.”

Twelve years later, Evans’ late-night project, Grubhub.com, had merged with New York-based competitor Seamless, debuted at $26 a share on the New York Stock Exchange, and was valued at $2.04 billion, per Reuters. Entrepreneur sat down with Evans ahead of the release of his book to discuss his wild journey from armpit to a millionaire, his frustration with Grubhub’s current reliance on gig economy workers, and how he’s trying to make good on his mistakes at his current startup, gender-inclusive handyperson company Fixer.

The book flashes between Evans’ journey starting Grubhub and the literal and emotional path of processing his experience there as he rode his bike on the 4,200-mile TransAm bike path from Virginia to California.

But it has a bevy of business insights, too. “The difference between not starting and starting is the hardest and biggest step,” Evans told Entrepreneur. “It’s the biggest decision and the biggest factor in terms of predicting success.”

How did Grubhub start?

After the armpit moment, Evans created a map with Chicago restaurants, restaurant names and phone numbers during an all-night coding session and Lucky Charms binge.

At the time it had no delivery service — it was just an online list and map divided out by zip code, and sometimes Evans would scan and add menus after ordering from nearby restaurants using the list. Evans hated his job at the time — like, listening-to-“I-quit”-songs hated his job. So he decided the hobby delivery guide needed to make some money, get him off someone else’s payroll and maybe even help him pay off the $236,000 in student debt he and his wife Christine had accumulated.

Enter: friend and coworker Matt Maloney. Evans told Maloney about his idea to have restaurants pay to be listed at the top of the Grubhub website. Shortly after, Maloney left their office for a long lunch, talked to a Chinese restaurant owner and her bartender son about this newfangled online delivery guide, and they paid $140 to be “premium listed” on Grubhub.com for six months.

It was the first dollar the company made. “A business comes into being with the first sale,” Evans wrote. “From this moment on, it’s a legitimate business, not a hobby.” But as he wrote in his memoir, he was never really the face of that business. Maloney was, and he served as CEO from 2004 to 2021 per an agreement the pair made when they raised money a few years in. (Maloney left the company in 2021, seven years after Evans did. Maloney is generally identified as a co-founder, but Evans refers to himself as the founder in the memoir.)

But before all of that, they were just two men with an idea and a desire to promote Chicago restaurants. They — well, mostly Evans, he contends in the book — started by going door-to-door, restaurant-to-restaurant in Chicago and picking up menus to scan while trying to sell the businesses on paid advertising. It was a churn and burn, on-foot business — until Maloney had the breakthrough moment. “Why can’t we just charge the restaurants per order?” Maloney said. He even came up with a tagline: “You don’t make a dime unless you make a dollar.”

It worked. Despite the intensity of building a network, subscription-based business from the ground up, Grubhub was actually good for restaurants, at least the way Evans tells it. It brought orders in, and Grubhub made a small commission on each sale. Evans taught himself to get restaurants on board, as he memorably recounts, buying Selling for Dummies at Borders bookstore. Evans and Maloney eventually realized online ordering was a lot easier for customers. After adding it, orders on the site tripled, and a month later Grubhub pulled in $20,000 in revenue.

This success led Evans to decide it was time to head to the capital of startup land, San Francisco, as the next city to add to the platform. In perhaps the book’s most memorable anecdote, Evans recounts traversing the entire city of San Francisco picking up menus to add to Grubhub.com

In any marketplace business, Evans says, you have to find a way to set up the network. “My answer to that question is [to] cheat,” he says, like how Uber paid drivers to sit idle before it had customers. “I did have some crazy energy. It’s not scalable. It’s not a particularly good idea.” But it drove traffic to the website, which helped him convince restaurants to take online orders and bring in more customers.

Evans hired someone named Tyler from Craigslist to be the business’s first employee in the area and sign on restaurants in San Francisco. Meanwhile, Evans and Maloney went to raise money, winning the University of Chicago’s New Venture Challenge and $50,000 in 2006, which gave them the capital to bring Maloney on full-time and access to the “startup Illuminati,” Evans wrote.

The pair used that network to find more investors, eventually signing what Evans joked in the book was the “worst investment deal ever signed” with Origin Ventures, which gave them $1 million for terms including what is called “participating preferred investment” (which means they get a larger chunk of a company after it sells than in most venture deals).

It also came with one other caveat: Evans couldn’t be co-CEO, but embedded in the paperwork was the provision that Evans could leave the company if and when it sold, without an earnout period. “It allows me to work hard without the specter of getting stuck,” he wrote. The terms were sort of bad, but it was cash. And it was time to grow.

Going off the rails

And the business did grow. Now, with the capital to buy Google ads and hire employees, Grubhub expanded into Boston, New York, Philadelphia, and Washington D.C., eventually entering 14 markets with just $3 million in outside capital. Early in that process, as Evans wrote, he noticed a “get rich quick” culture start to develop among the company’s employees — a focus on enriching Grubhub at the expense of restaurants. Evans worked with the team to keep their focus on “making delivery better” and independent restaurants.

But Evans, whose share in the company was to 14% due to that initial venture deal, also quickly lost the logistical power to determine what the company’s focus should be. By the fall of 2010, after years of slow, hard-won growth, Maloney and Evans started taking meetings with VCs like Sequoia and Benchmark and raised $31 million. “Nothing would ever be the same again,” Evans wrote, and he was right.

The company became profitable again after using just one-third of that capital and began doubling every 10 month, Evans says, creating a big shiny goose egg for investors, who all want one thing — an IPO. “Greed. Greed happens,” he wrote.

Post-2010, Grubhub bought CampusFood, opened a shiny office in downtown Chicago and merged with NYC-based competitor Seamless. Evans writes that fought to cap the fees restaurants paid the company at 17% and eventually lost that battle. He also unsuccessfully campaigned against adding Taco Bell or Pizza Hut to the platform and charging them less than independent restaurants for top spots.

The company went public in April 2014 after years of prep. It added its own delivery network in 2015. Evans was pretty much spiritually out of the company at that point, he wrote. But he wasn’t proud of how the whole gig-economy thing turned out, writing in his book that Grubhub became something never wanted it to be: a “wildly exploitative” business that shaves off already thin restaurant margins and employs millions of contract workers who bike and drive around the U.S. with no benefits or other labor protections

He frequently argued in the book that the best way to keep customers coming back is to make it easier for restaurants to deliver a good product.

“The way to make the product better is to make sure that the customers get the best choice and the best food the fastest,” he tells Entrepreneur. “The answer to that, fundamentally, is don’t have all of your drivers be gig economy drivers. You want full-time employees who drive a higher quality experience. That’s blasphemy in the public [market] realm. If I was on the Grubhub board and I said that, I would not be on the Grubhub board anymore.”

As for the transcontinental, post-Grubhub journey he also recounted in the book, there were moments where he lost control of his recumbent bike, flying down hills or getting injured. It mirrors the elements of losing control and burning out during his Grubhub journey.

He started the company because he hoped to pay off debt and find a way to fill his belly more easily. Along the way, he rubbed shoulders with (and snubbed his nose at, as he detailed in the book) Goldman Sachs bankers and took an irreverent, almost manic approach to building a business on a shoestring budget before eventually losing the battle to the suits. But he does hope, he said in the interview, to not repeat the mistakes he made in the Grubhub days.

And though Evans might have burned out on Grubhub, he hasn’t burned out on entrepreneurship. In 2017 he started Fixer, an on-demand handyperson service that also provides education and focuses on hiring for diversity. “Always be learning, right?” he says. “I took a business from my apartment through the IPO, and I feel like I’m learning more the second time around than the first time.” 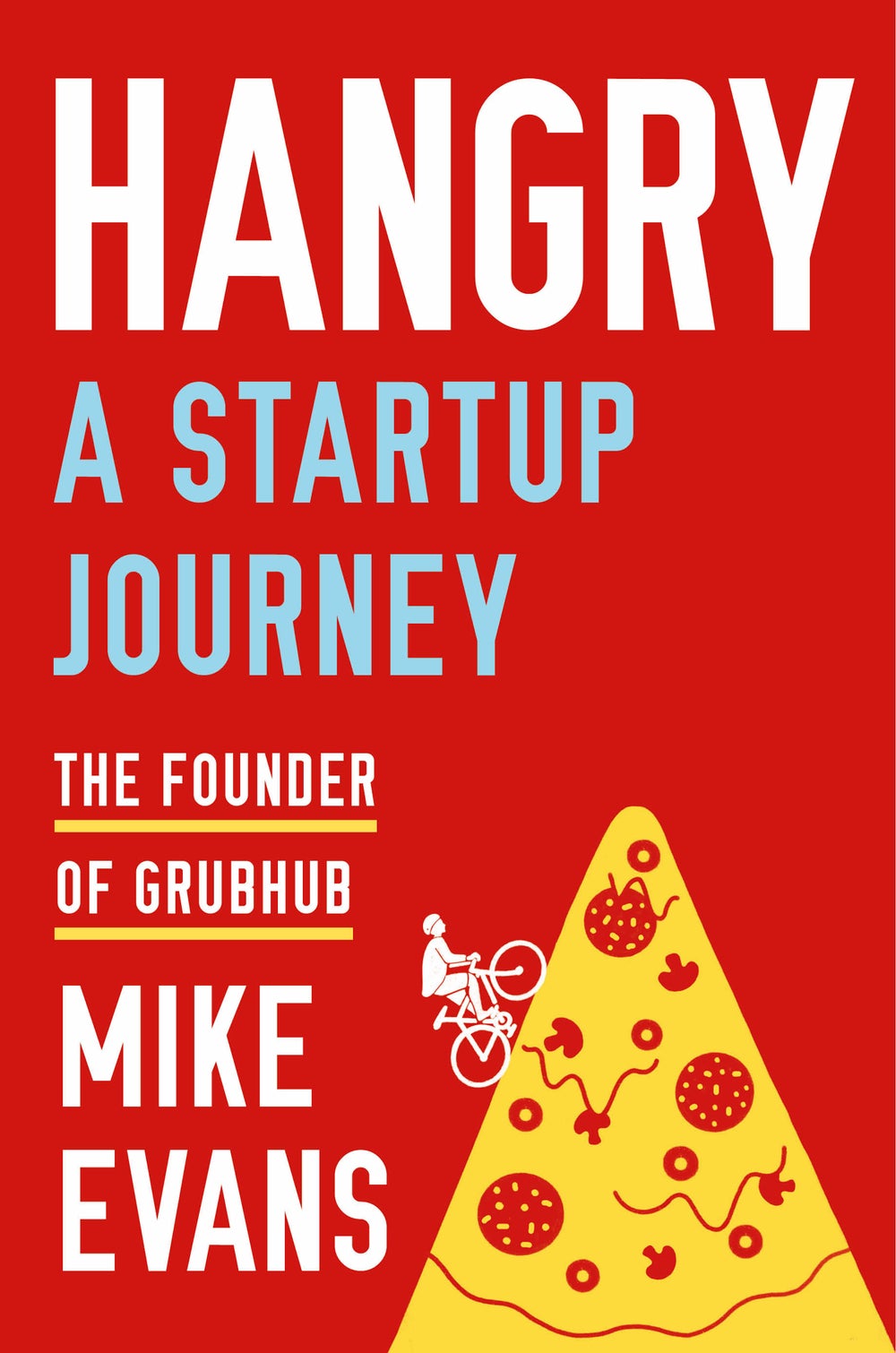 Artificial Intelligence as the core of logistics operation

3 Ways to Update Your Career Page