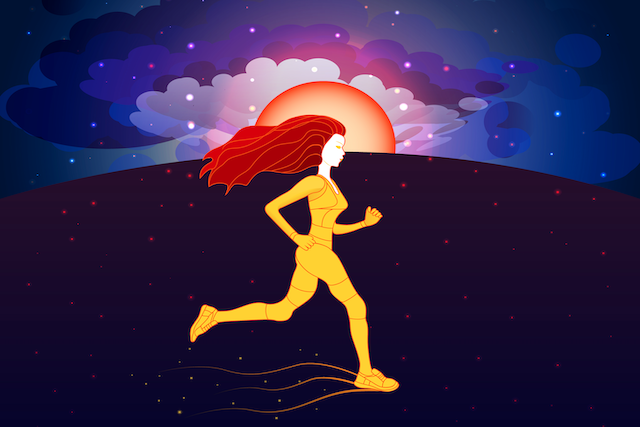 “If we can see past perceived limitations, then the possibilities are endless.” ~Amy Purdy

Nature inspires me. There are hidden messages consistently on display. On my daily walks, I find myself interpreting these messages in relation to my life.

One day, near the end of my walk, I was paying attention to the trees. A giant one caught my eye. Its magnificence was portrayed as morning sunlight peeked through the branches and bright green leaves.

I noticed the enormity of its trunk, and then I saw the crooked fence.

The giant tree trunk had grown so big that it pushed a section of the fence up off the ground. The fence barely had any balance left and looked as if it could topple over at any moment.

As I watched all of this, I remembered another tree I had seen on one of my walks. The tree’s branches had grown so long and so thick, they struck through the slats on a metal fence. Big brown wooden knobs stuck out, encapsulating the thin wires. I was in such awe, I reached out and touched the chunky parts of the tree, thinking I could unwrap it from the fence. Not a chance. The fence had become a part of the tree.

In seeing this tree, I thought, “Trees just do what they do. They continue to grow despite any objects that happen to be next to them.”

These objects could appear as obstacles, but that does not stop the tree from growing. The tree adapts to its surroundings and keeps on keeping on. Depending on the barrier, the tree either continues to grow around it, or the tree ends up wiping out whatever is in its way.

How is this symbolic in the life of a human?

The nature of our true essence is to grow. Life seems to contain many events that are beyond our control. We find ourselves in situations where it seems we are being tested. Obstacles show up on our path, and we are faced with the question, “What do I do now?”

Here is how this relates to an experience I went through in my early twenties. It was a true test of following my inner guidance instead of listening to the doubts of others around me, as well as my own uncertainties.

At the age of twenty-two, I found myself pregnant, single, and living back at home with my mother. I was working an office job forty hours a week, making ten dollars an hour. Luckily, I had good health insurance, but what I didn’t have was a lot of self-confidence. I carried around shame.

This was in the year 2001. Times had changed, right? Why was I so ashamed of being a young, pregnant, unwed girl?

Because even in current times, that stigma was carried around deep in the trenches of society. And my own mother and older sisters had been through it, too. You could say the feeling of shame was passed down in many generations.

After my son was born, I knew I had to do something different with my life. I received government help for food and baby formula, and my son was on government health insurance. Again, this only added to my shame because of the looks I would get at the checkout counter in the stores.

But I knew I wanted to provide a better life for my son, and I knew there was something inside of me that wanted to grow beyond what I thought my potential was.

I hadn’t even enrolled in college yet, but when I began speaking aloud about my plan, fear set in, and people’s opinions fueled that fear.

How would I attend college full-time with a four-month-old baby, work to provide for us, and find childcare in the meantime? Could I do it?

Some people didn’t think so. They told me it would be too hard. They told me my son was too little, that I should wait until he was older.

Attending college and raising my son would be too stressful. How did I plan to pay for tuition? Could I even get accepted into the highly competitive program, especially since I was already on academic probation?

Right out of high school, I proved to lack ambition, and along with poor grades, I ended up dropping out of college after just two years of study. Now, how in the world was I going to get the university to accept me back, especially as a newly single parent?

The obstacles kept appearing, left and right. A university advisor even told me that the program I wanted into was extremely challenging. He asked me, “Do you have family who can help you with your son? Because this program is rigorous and requires a lot of time.”

Imagine, all of these stumbling blocks could have made me believe that I was not capable of pulling it off. I could have chosen to believe what I was hearing.

I could have formed beliefs telling me my plan wouldn’t work. I had the choice to follow my inner guidance, my true essence, which pushed me ahead to grow, or I could believe my thoughts about it all being too hard. I could buy into the shame and the collective idea that I had no future.

But there was something deep inside of me that knew I was meant to do this. I was meant to challenge all of the belief systems put in place that could hold me back.

Back then, I did not know the power of positive thinking. I had never heard of manifestation. There were no tools in my toolbox to help push through any doubts. All I had was my inner guidance system and the strong desire to grow and show myself that I could do something really challenging.

Four years later, after a lot of hard work, I graduated from college with a bachelor’s degree in respiratory therapy and was already employed at a local trauma hospital. I was living out on my own with my son and supporting us with my single income. I had found my passion for life, too. I was helping people who were sick.

Our lives are a reflection of what we believe is true and possible. The belief systems we have in place guide our thoughts, desires, and the actions we take or do not take to make things happen.

Instead of letting your beliefs hold you back, use this process to grow around them.

How To See Through Your Belief System

2. Write down every belief you have about that goal or situation, specifically, any beliefs you sense are holding you back.

“I don’t have enough time.”

“I don’t have enough experience yet.”

“My family would never approve.”

3. Take some quiet time to engage with these beliefs. Sometimes I find it helpful to think about these during walks, while driving, or while I’m out in nature.

4. Question where these beliefs came from. Usually, you will see the restrictive beliefs come from somewhere outside of you. They are ingrained from childhood, simply adopted from your parents and caregivers. You will even see a lot of beliefs come from society on a collective level.

5. Once you can see where the beliefs come from, you have a choice whether to keep believing in them. What worked for me was not to try to change my beliefs into the opposite but to keep identifying that the belief was outside myself. The belief was not a part of my inner guidance. And then I would choose to move past it, not allowing it to hold me back.

Seeing through your belief system is not an overnight process. More than likely, the systems have been with you for a long time. It can take discipline and effort to recognize them when they arise.

Recognition of your inner guidance during this process is vital. It will not fail you.

Keep listening to your inner guidance, your true essence. It will take you beyond your wildest dreams. It will be the tree that grows through fences.

Raquel Bravo is a writer, blogger, and respiratory therapist. She is the creator of the blog, Stillness Within where she hosts both writers and artists with different backgrounds. You can contact her via email thestillnesswithus@gmail.com or find her on Instagram @thestillnesswithinus where she shares inspirational quotes and stories.

The post How We Can Overcome Our Obstacles When We Don’t Believe It’s Possible appeared first on Tiny Buddha.

101 Best Motivational Quotes That Will Inspire Your Success