By now, you’ve probably seen the rude Save Ralph short by now, if it’s not a good time to keep an eye on it. In a kind of mockumentary, it tells in almost four minutes the story of a rabbit named Ralph, who works in a laboratory that tests cosmetics on animals. This one has caused a stir in the public and generated millions of views. But why has ‘ Save Ralph ‘ gone viral compared to others?

It has been more than 100 years since animal testing became popular and although the subject is not new and many organizations fight every year for this practice to be banned globally, no campaign has had a global reception like the one now led by Humane Society International , (HSI).

Even other initiatives carried out by the same HSI have not had the same impact in the social sphere. For example, #BeCrueltyFree , launched in 2012 targeting Australia, Guatemala, India, and Canada. That although they generated a legislative change, it did not resonate much with consumers.

One of the most important is Cruelty Free International , who since 1989 have been fighting cruelty to animals, also leading a global initiative together with The Body Shop brand since 2017 under the motto Forever Against Animal Testing , (Always against animal testing, in Spanish).

In Spain, a case of animal cruelty has been uncovered in the Vivotecnia laboratory in Madrid. In a two-year undercover job by Cruelty Free International , they managed to collect very strong images showing how rabbits, rats, monkeys, dogs and pigs are treated. The local government is now being pressured to take the case to court .

You can help us shut #Vivotecnia . We’re demanding the local authority withdraw Vivotecnia’s license to carry out animal experiments, and the facility be closed down now. Sign the petition & RT today to demand justice for animals https://t.co/SVinIfujbB pic.twitter.com/NXJjflDPID

And of course, PETA , who have a program to rate products free from animal testing that began in 1987 under the name Beauty Without Bunnies . In more than 30 years, thousands of brands have entered the list.

In the mockumentary, Ralph is interviewed about his “job” and explains that thanks to his employment he cannot see through one of his eyes or hear with one of his ears because of the chemicals used on his body, in addition to a burn on his spine. it hurts at all times. Then, a human hand takes him out of his “house” to take him to other rabbits who implore him if they can get them out of captivity. Seconds later a syringe is inserted into his “good” eye. In the next shot, Ralph appears, already blind, with a collar and the injury in his spine becomes visible, for which he is no longer able to even see the camera.

In the crude narrative they also explain that their entire family has worked and died doing the same “work”, in addition to highlighting the cruelty we submit to animals “because humans are more important.”

To close the cut, the phrase appears that says: “No animal should die and suffer in the name of beauty .”

Although the original version is in English, it is already available in Spanish with the voices of George Lopez, Wilmer Valderrama and Rosario Dawson. It will also be released in French, Portuguese, and Vietnamese. However, before this happened, it had already been subtitled by the El Universo channel, better known for eh! , which has made it easier for the video to go viral in Spanish. This already has more than 42 million views and almost 40 thousand comments on Instagram. On the other hand, the official video published by the Humane Society, already almost reaches 700 thousand views only on YouTube .

Why does one social campaign work better than another? On the web, there are hundreds of testimonials about this problem, however, no matter how explicit and cruel the images were, they did not have the same result. As I mentioned before, other associations have fought for years to eradicate animal testing and although they have had important achievements, the difference lies in the social awareness that Save Ralph generated. None other managed to make consumers really question what products they are buying and what happened for these to reach the market and therefore, into their hands.

In this regard, we spoke with Iván Morales, editorial director of Cine Premiere and an expert in cinematography, to give us a perspective from the audiovisual analysis on the success of Save Ralph.

“ Definitely the impact of this campaign is due to two main things: the talent behind it and the decision to do it as an animation. On the one hand, Taika Waititi has become (surely since directing Thor Ragnarok and What We Do in the Shadows ) one of the most attractive personalities. Plus there’s Ricky Gervais, who “commands” an even larger fan community. The two of them (in addition to the entire Hollywood community that paid attention to the short thanks to them) have been in charge of giving it a ‘word of mouth’ spread that would hardly have been achieved with a traditional marketing campaign ”, says Iván. 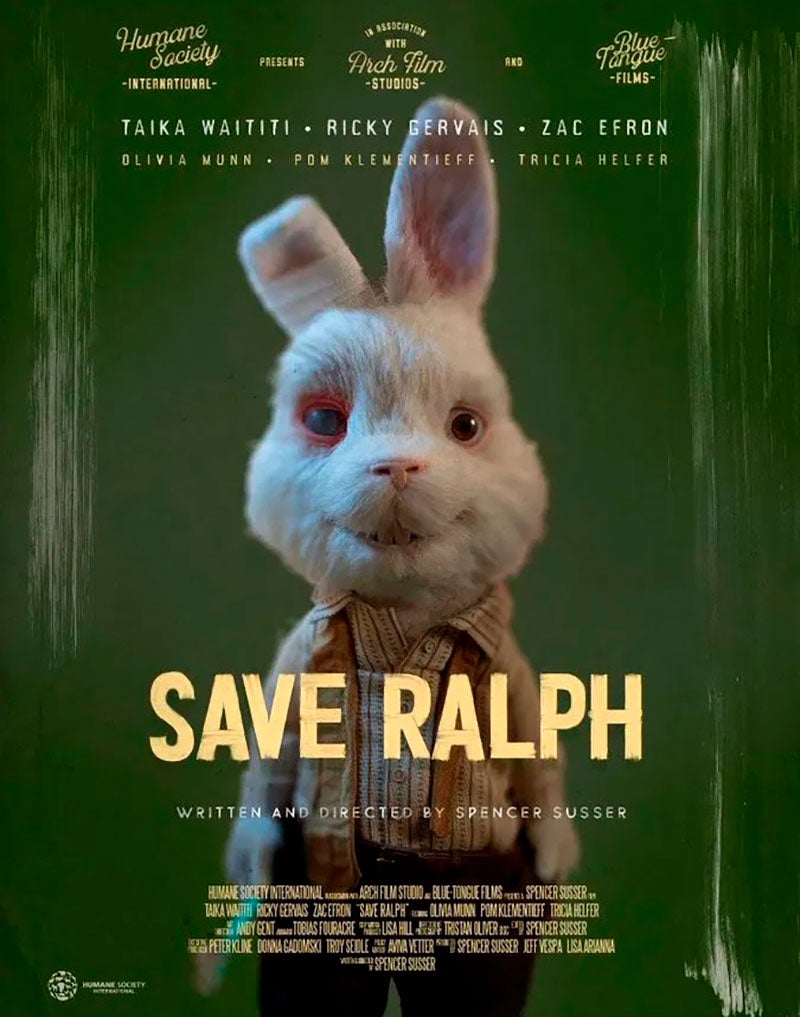 Second, but not least, Morales emphasizes the format. “The fact of having made the short in stop motion animation and with a dry and ironic humor, makes it very digestible for an audience that is perhaps already ‘tired’ of seeing so many products that show us how badly we treat the planet and animals around us. In a way, I think everyone knows it, but nobody wants to face it or they see it, perhaps, as a lost cause ”.

“By doing things like this, in animation and ‘light’, the message can penetrate much further and go further,” explains the film expert.

“Usually these types of campaigns (like the ones PETA launched in recent years with Joaquin Phoenix ) are aggressive and try to strike with shocking and crude images. This is a different approach and perhaps that is why it has also been so successful in terms of its dissemination ”, concludes Iván.

What the creators say

In a press release from Humane Society International , he explains that the goal is to “shed light on the suffering of animals and involve consumers and policy makers in HSI’s mission to ban cosmetic testing on animals.”

Society President Jeffrey Flocken said: “ #SaveRalph is a wake-up call to the fact that animals still suffer from cosmetics and that it is time for this to stop. Today we have a wealth of reliable, animal-free methods to ensure product safety, so there is no excuse for making animals like Ralph suffer in testing . “

For his part, Director Spencer Susser , commented: “Animals for cosmetic testing in laboratories have no other choice and it is our responsibility to do something about it. When the opportunity arose to create a new campaign for Humane Society International, I felt that stop motion was the perfect way to get the message across . When you see the horrible reality of the way animals are treated, you can’t help but look away. What I was hoping to do with this film was create something that conveys a message without being too heavy. I hope that the public falls in love with Ralph and wants to fight for him and other animals like him, so that we can ban the tests once and for all. ”

What is happening in Mexico and the world with animal testing?

The campaign focuses on 16 countries including Brazil, Canada, Chile, Mexico, South Africa, and 10 Southeast Asian nations . This practice is already banned in 40 countries, but it is still legal in most of the world. In addition, the HSI seeks to defend existing bans as in Europe, where loopholes are exploited and new tests of cosmetic ingredients on animals are being required.

In Mexico, the HSI has been active since 2017 to stop testing in Aztec territory. This would make it the first country in North America and 41st in the world to ban them.

In March 2020, the Senate of the Republic approved a bill to prohibit the use of animals in the production, research and development of cosmetics in Mexico. However, the proposal must be approved by the Chamber of Deputies before the end of this April. Failure to do so, could stall the initiative with no tentative end date.

To help fight cosmetic and ingredient testing on animals, you can sign the petition . Also, look for information on which products are cruelty free . Remember that as consumers we have the power to choose whether or not to buy.

3 Ways to Stay Competitive in an Uncertain Climate

10 Things You Didn't Realize Were Invented in the 1980s