Helping out a friend in need online can be surprisingly difficult. While giving cash is easy enough, that’s often not what people need most — so Give InKind aims to be the platform where you can do a lot more than write a check. The idea is such a natural one that the company tripled its goal for a pre-seed round, raising $1.5 million from Seattle investors.

The company was selected for inclusion in the Female Founders Alliance’s Ready Set Raise accelerator, at the demo day for which I saw founder Laura Malcolm present.

The problem Malcolm is attempting to solve is simply that in times of hardship, not only do people not want to deal with setting up a fundraising site, but money isn’t even what they require to get through that period. Malcolm experienced this herself, when she experienced a personal tragedy and found that what was out there to let others help was simply inadequate.

“My friends and family were trying to support me from around the country, but the tools they had to do that were outdated and didn’t solve the problems for us,” she explained. “There just wasn’t one place to put all the help that’s needed, whether that’s meal drop-off, or rides to school for the kids, or a wishlist for Instacart, or Lyft credits. Every situation is unique, and no one has put it all together in one place where, when someone says ‘how can I help?’ you can just point there.” 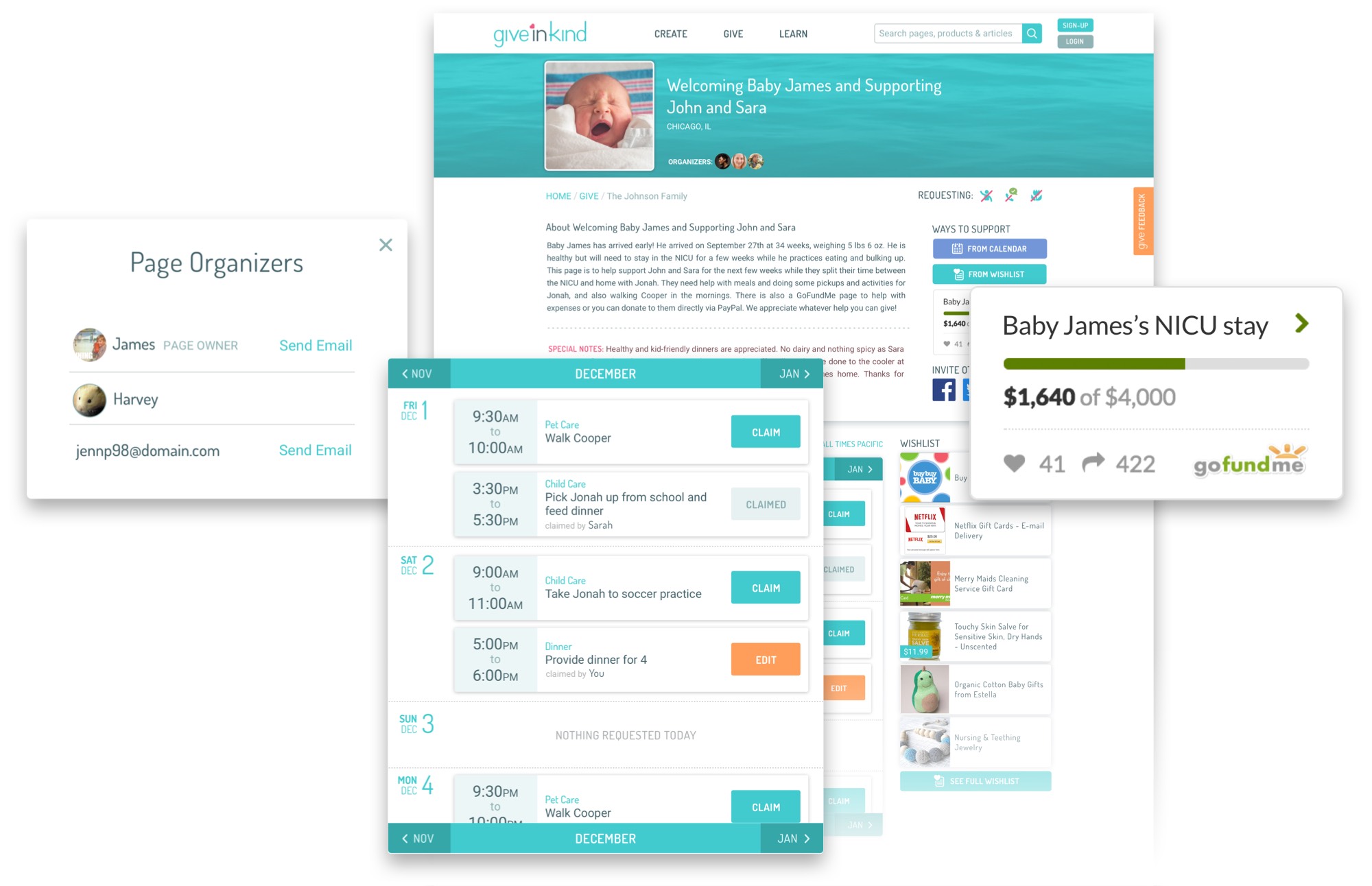 The idea with Give InKind is to provide a variety of options for helping someone out. Of course you can donate cash, but you can also buy specific items from wishlists, coordinate deliveries, set up recurring gifts (like diapers or gift boxes), or organize in-person help on a built-in calendar.

These all go on a central profile page that Malcolm noted is rarely set up by the beneficiary themselves.

“90 percent of pages are set up by someone else. Not everyone has been impacted by one of these situations, but I think almost everyone has known someone who has, and has wondered how they were supposed to respond or help,” she explained. “So this isn’t about capturing people during a time of need, but about solving the problem for people who want to know how to help.”

That certainly resonated with me, as I have always felt the cash donation option when someone is going through a tough time to be pretty impersonal and general. It’s nice to be able to help out in person, but what about a friend in another city who’s been taken out of action and needs someone else to figure out the dog walking situation? Give InKind is meant to surface specific needs like that and provide the links (to, for instance, Rover) and relevant information all in one place.

“The majority of actions on the site are people doing things themselves — signing up for meals, or to help. The calendar view is for coordination, and it’s the most used part of the site. About 70 percent is that, the rest is those national services [i.e. Instacart, Uber, etc.],” Malcolm said. 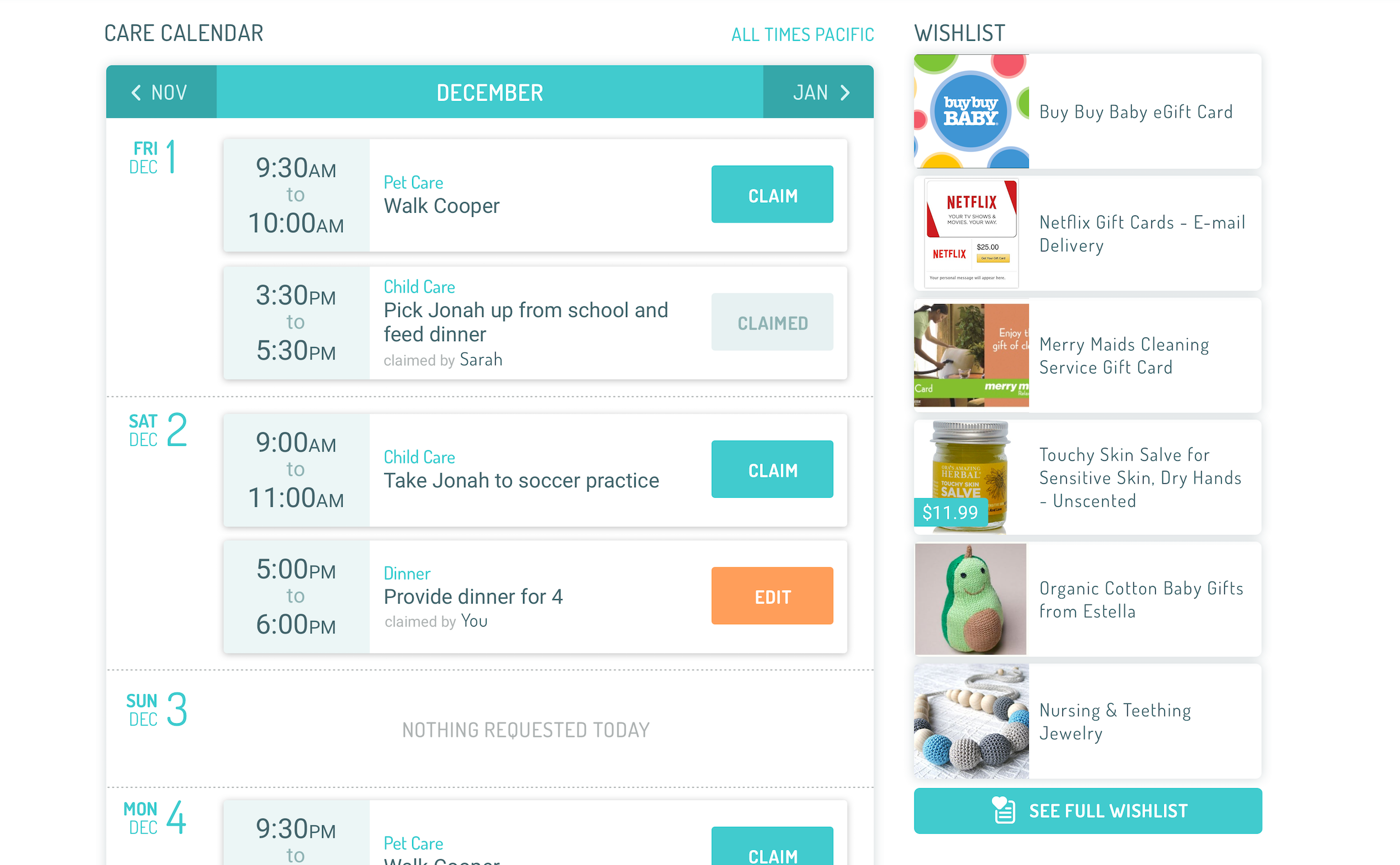 Locally run services (cleaners that aren’t on a national directory, for instance) are on the roadmap, but as you can imagine that takes a lot of footwork to put together, so it will have to wait.

Right now the site works almost entirely on an affiliate model; Helpers make accounts to do things like add themselves to the schedule or help edit the profile, then get sent out to the merchant site to complete the transaction there. The company is experimenting with on-site purchases for some things, but the idea isn’t to become host transactions except where that can really add value.

The plan for expansion is to double down on the existing organic growth patterns of the site. Every page that gets set up attracts multiple new users and visits, and those users are far more likely to start more pages even years down the line. Between improving that and some actual marketing work, Malcolm feels sure that they can grow quickly and could soon join other major giving services like GoFundMe in scale.

Give InKind came to my attention through the Female Founder Alliance here in Seattle, which hosted a demo night a little while ago to highlight the companies and, naturally, their founders as well. Although some of the companies focused on female-forward issues, for instance the difficulty of acquiring workwear tailored to women’s bodies, the idea is more to find valuable companies that just happen to have female founders.

“Ready Set Raise was built to find high potential, dramatically undervalued investment opportunities, and translate them into something the VC community can understand,” said FFA founder Leslie Feinzaig. “Our last member survey results were consistent with findings that women founders raise less capital but make it go further. Give InKind is a perfect example. They bootstrapped for 3 years, found product market fit, grew 20% every month, and still struggled to resonate with investors.” 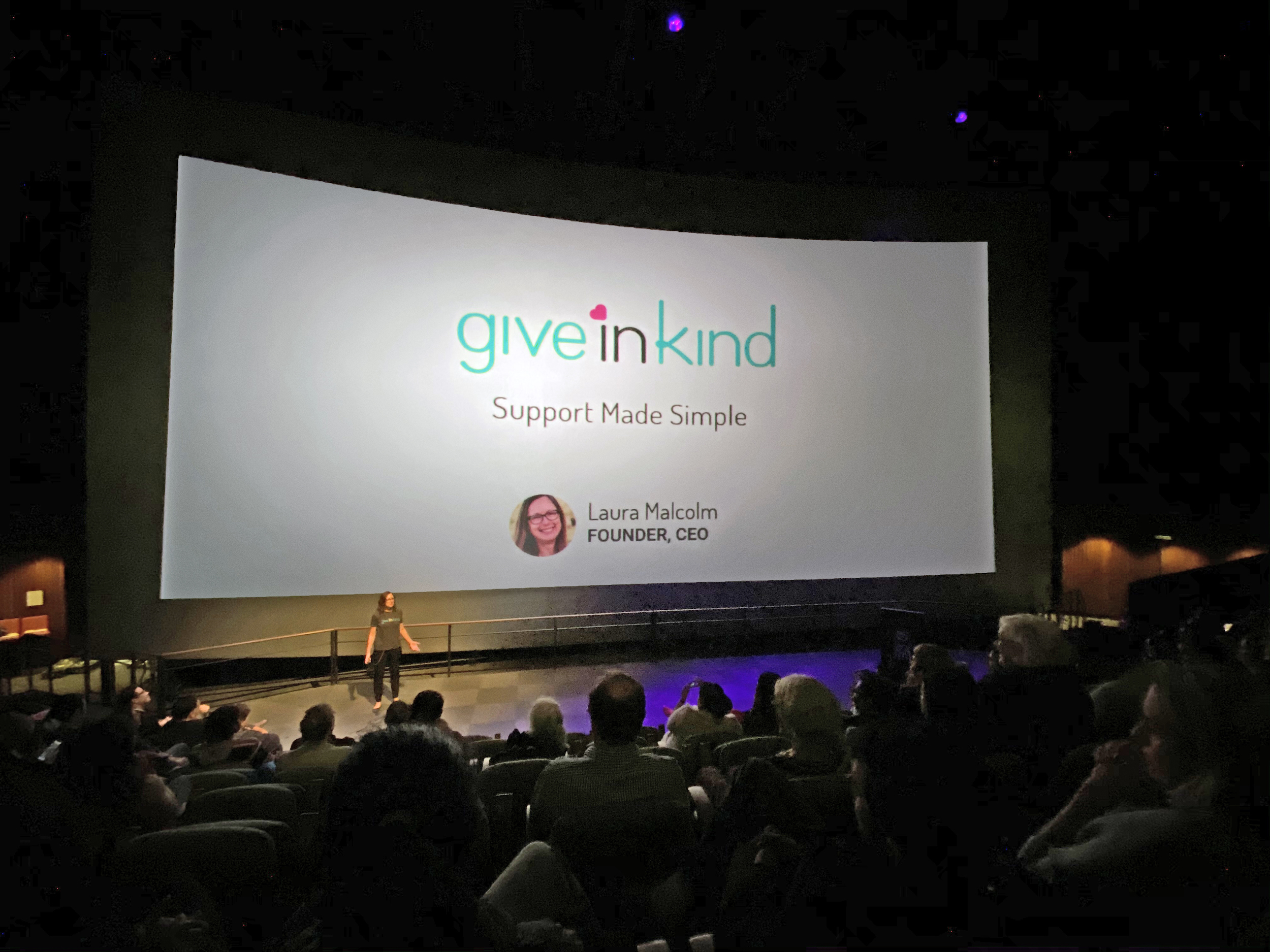 Yet after presenting, Malcolm’s company was honored at the event with a $100K investment from Trilogy Ventures. And having originally kicked off fundraising with a view to a $500K round, she soon found she had to cap it at an unexpected but very welcome $1.5M. The final list of participants in the round includes Madrona Venture Group, SeaChange Fund, Keeler Investments, FAM Fund, Grubstakes, and X Factor Ventures.

I suggested that this must have been something of a validating experience.

“It’s super validating,” she agreed. “The founder journey is long and hard, and the odds are not in favor of female founders or impact companies, necessarily, and consumer is not huge in Seattle, either. We really sort of defied the odds across the board raising this round so quickly… Seattle really showed up.”

She described the accelerator as being “incredibly unique. It’s entirely about creating access for female founders to investors, mentors, and experts.”

“We spent so much time turning my model upside down and shaking everything out of it. Turns out it was much more defensible than I thought. We didn’t change the business, and we didn’t change the product — we lightly changed the positioning,” she said. “This combination of access with coaching and mentorship, getting the ability to present the business in a way that’s compelling, you realize how much of this is held back from people who don’t have these opportunities. I’ve been carrying around Give InKind for three years in a paper bag, and they put a bell on it.”

Feinbaig cited the competitiveness of the application process and quality of their coaches, which give lots of 1 on 1 time, for the high quality of the companies emerging from the accelerator. You can check out the rest of the companies in the second cohort here — and of course Give InKind is live should you or anyone you know need a helping hand.