Netflix is testing a new way to help users find TV shows and movies they’ll want to watch with the launch of a “Collections” feature, currently in testing on iOS devices. While Netflix today already offers thematic suggestions of things to watch, based on your Netflix viewing history, Collections aren’t only based on themes. According to Netflix, the titles are curated by experts on the company’s creative teams, and are organized into these collections based on similar factors — like genre, tone, storyline, and character traits.

This human-led curation is different from how Netflix typically makes its recommendations. The streaming service is famous for its advanced categorization system, where there are hundreds of niche categories that go beyond broad groupings like “Action,” “Drama,” “Sci-Fi,” “Romance,” and the like. These narrower subcategories allow the streamer to make more specific and targeted recommendations.

Netflix also tracks titles that are popular and trending across its service, so you can check in on what everyone else is watching, as well.

The new Collections feature was first spotted by Jeff Higgins, who tweeted some screenshots of the addition.

If you’ve been opted in to the test, the Collections option is available at the top right of the app’s homepage — where My List would have been otherwise.

Netflix Collections is your new way of finding what you want to watch, fast. pic.twitter.com/kKfciBWCg4

The suggestions are organized into editorial groups, with titles like “Let’s Keep It Light,” “Dark & Devious TV Shows,” “Prizewinning Movie Picks,” “Watch, Gasp, Repeat,” “Women Who Rule the Screen,” and many more.

You can follow the Collection from the main screen, or you can tap into it to further explore its titles. 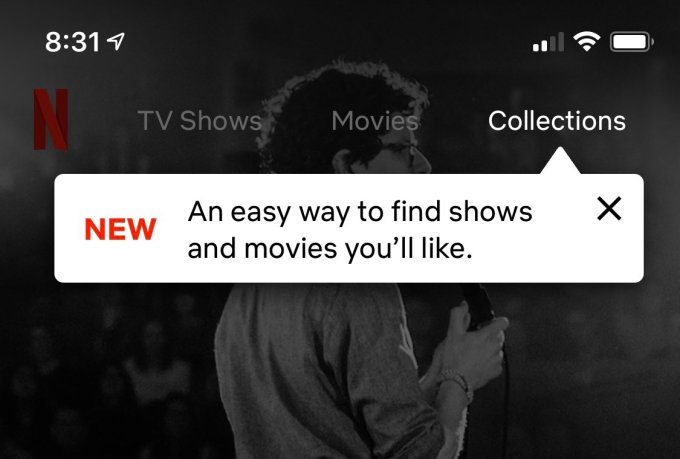 If you tap a collection that interests you, it smoothly expands to the show the thumbnails of the suggested titles below a header that explains what the collection is about. You can choose to follow the suggestion from here too, which presumably ties into Netflix’s notification system.

Collections are also found on the app’s Home page, for those who have access to the new feature.

“We’re always looking for new ways to connect our fans with titles we think they’ll love, so we’re testing out a new way to curate Netflix titles into collections on the Netflix iOS app,” a Netflix spokesperson confirmed to TechCrunch. “Our tests generally vary in how long they run for and in which countries they run in, and they may or may not become permanent features on our service.” 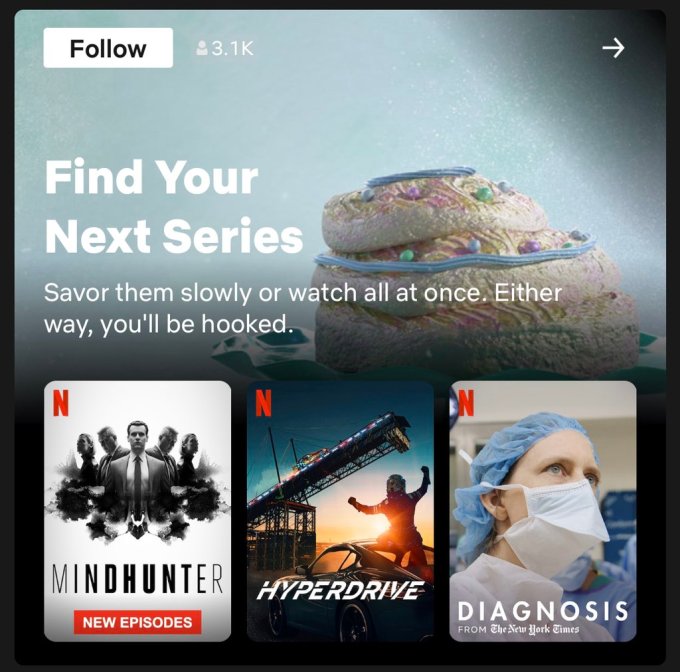 This isn’t the first time Netflix has toyed with organizing content suggestions into Collections. The company’s DVD service (yes, it still exists), had rolled out a similar Collections feature in its own mobile app.

This test comes at a time when Netflix is working on features to better retain existing subscribers amid increased competition, including that from upcoming rivals like Disney+ and Apple TV+, among others. On this front, it also recently launched a feature allowing users to track new and soon-to-launch releases, as a means of keeping subscribers anticipating what comes next.

Netflix said Collections is only available on iOS. As a test, it won’t show to all users.

Ready or not, the first Sonic the Hedgehog trailer is here

Welcome to hot due diligence summer