Porsche has taken the wraps off the interior of the all-new, all-electric Porsche Taycan ahead of its world debut September 4. Gone are the buttons and the clutter. This is a sleek interior for the modern digital age.

Porsche released several images of the interior on Thursday. Earlier this week, TechCrunch was among numerous media outlets that got an up-close view of the interior (along with some other things we can’t talk about) and a chance to play around with the infotainment system.

Porsche didn’t just slap a bunch of screens in and call it a day. Here are the details and what stood out.

At first glance, the dashboard might give viewers a twinge of déjà vu. And they wouldn’t be wrong.

Designers used the dashboard from the 1963 Porsche 911 as inspiration. And that’s evident in the images below.

The 911 DNA in this interior is apparent. But this isn’t some throwback. This is a modern vehicle with its own design story, which includes horizontal digital screens that are sandwiched between the upper and lower dash lines and stretch all the way over to the passenger seat. 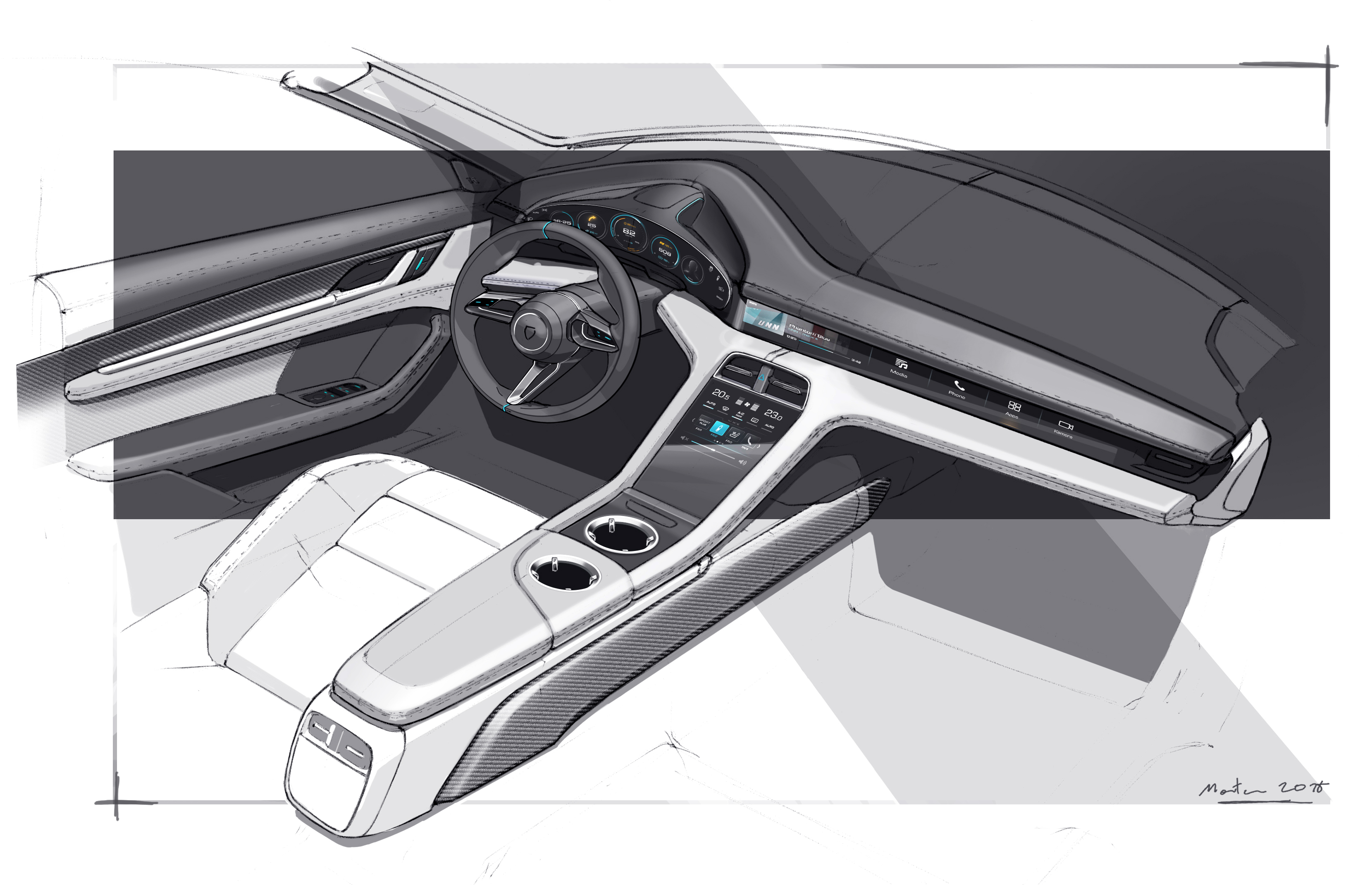 The elevated center console stretches down from the horizontal central screen to two air vents that are not the mechanically operated louvres found in most vehicles today. Instead, the direction of the airflow is controlled digitally via an 8.4-inch touch panel located just below the central screen. This touch panel houses the climate control system and includes a track pad with haptic feedback. The trackpad can also be used for quick address inputs.

Tucked under the touch panel is a small flat space to place a wallet or phone. Two cups holders and a storage unit, which is equipped with wireless charging and two USB ports, completes the center console.

Porsche’s design team repeatedly talked to TechCrunch about the emphasis on the driver. And that shows. (The design team worked on the interface alone for 3.5 years.) Although, there are plenty of passenger features here, as well. From the driver’s seat, everything is in reach and without constantly looking over to the center display. Natural voice integration courtesy of Nuance is activated by a “Hey Porsche” trigger or simply pressing the voice button on the central display or dedicated button on the steering wheel.

The minimalist design continues to the all-digital instrument cluster. This free-standing panel, which houses the instrument cluster, has a slight curve to it. Interestingly, it doesn’t have the standard cowl or lip that is often used to prevent reflection. Instead, Porsche used glass coated with a vapor-deposited polarizing filter. 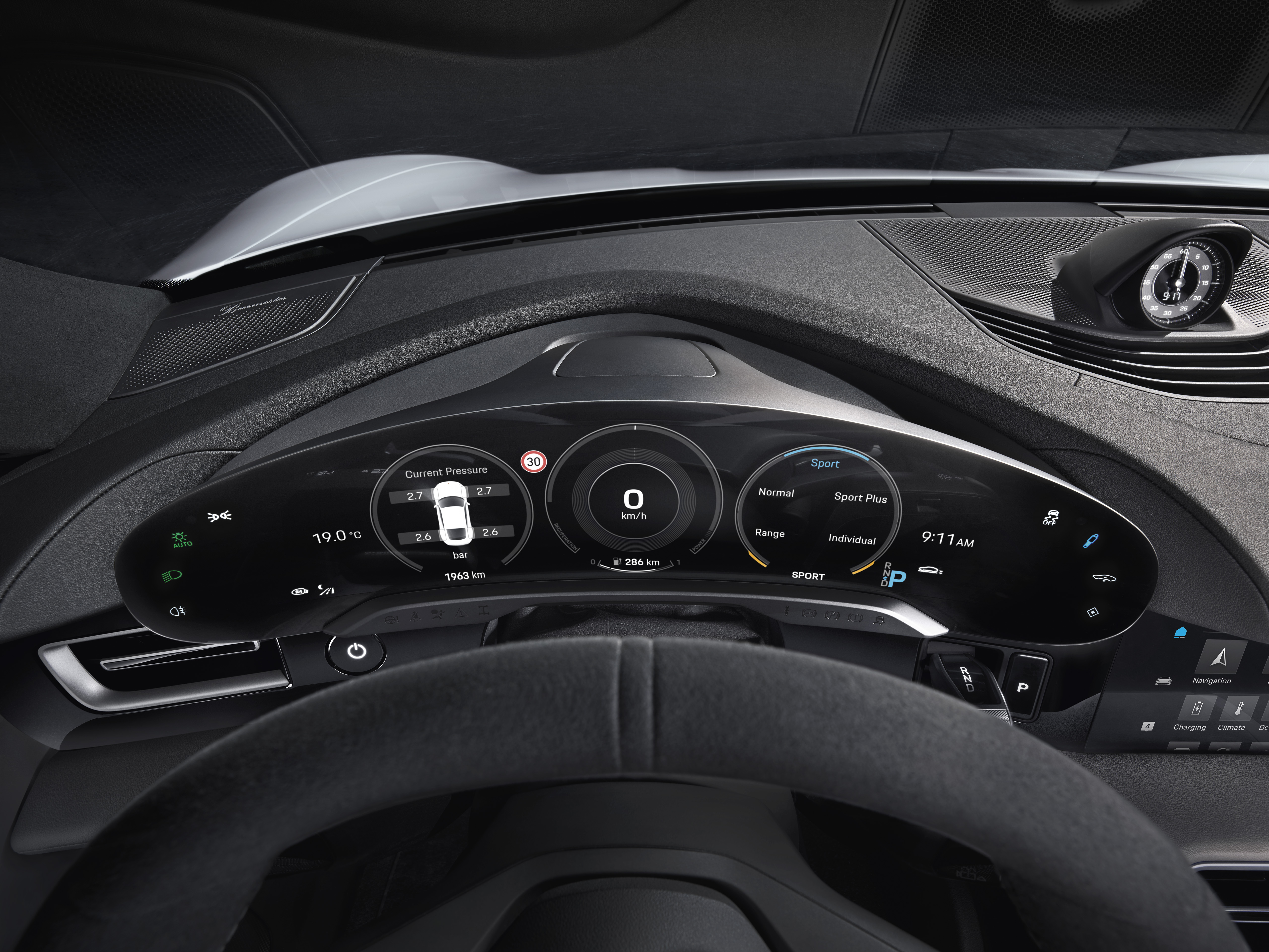 Inside the 16.8-inch cluster display, the driver will see three round instruments that display information. Drivers can customize what each of these instruments displays. Drivers also can remove the information for a more streamlined look in “pure mode.”

This pure mode displays only essential information, such as speed, navigation or traffic sign recognition (so you know what the speed limit is). Pure mode, which manages to give the interior an even more minimalist look, could be a handy and fun feature for a Taycan owner on track day.

Perhaps one of the most functional features is the map mode. The map replaces the central power meter in this mode. But it really becomes useful when “full map mode” is turned on, which extends the map across the full display. TechCrunch wasn’t allowed to take photos of the interior during its visit to Porsche North America headquarters, so readers will have to imagine a digital map taking up most of the instrument cluster.

Finally, just to the left and right of the main instrument cluster, drivers will see small, touch-control fields at the edges of the screen for operating the light and chassis functions. One of these buttons is a trigger key, which lets drivers customize what it operates.

Scanning the interior, it becomes quickly obvious that the classic transmission shift selector lever is not in the center console. Looking to the right of the steering wheel and in the instrument cluster is a compact transmission shift switch — the same used in the Porsche 918.

The Porsche Taycan has several screens. Oh, so many screens. Beyond the digital instrument cluster is a horizontal 10.9-inch central display. Directly below this is a tilted screen that houses climate control as well as a digital track pad that gives haptic feedback.

From the central screen and moving to the right is a display for the passenger. The passenger display cannot be turned on if the driver is the only one in the vehicle, according to Oliver Fritz, director of driver experience at Porsche.

Porsche is experimenting with streaming video on the passenger display. This likely won’t be available when Porsche begins delivery before the end of the year, but could be rolled out in future over-the-air software updates. For now, the company is testing technology that would prevent the driver from being able to view the screen. Fritz emphasized that this idea was still in testing and Porsche won’t roll out streaming video unless it’s sure the driver cannot see the screen.

Porsche designers have made “dark mode” the default in the instrument cluster and the rest of the infotainment system. That can be changed to a white background, Porsche said. TechCrunch doesn’t recommend that though. The dark mode, and the ability to turn off the central 10.9-inch infotainment display and optional passenger one, should let drivers enjoy the road and escape the annoying “blue light” that emanates from so many vehicles these days.

Porsche will offer a number of color combinations in the interior, including an all-black matte look, which TechCrunch viewed. The company’s design team didn’t reveal the total number of interior color combinations, but they did list a few. There will be four exclusive interior colors for the Taycan: a black-lime beige, blackberry, Atacama beige and Meranti brown. An optional interior accent package will include black matte, dark silver or neodyme, which is like a champagne gold color.

The doors and center consoles can have wood trim, matte carbon, embossed aluminum or fabric.

The company is also offering a leather-free trim interior, which includes the steering wheel. One such material is called “Race-Tex,” a microfiber material partially consisting of recycled polyester fibers. The floor covering uses the recycled fiber “Econyl,” which is made from recycled fishing nets, among other things, Porsche said.

Porsche designer Thorsten Klein was careful not to call it vegan. He told TechCrunch that even synthetic materials can be treated using animal products. Porsche is pushing to source materials that don’t use these processes, but until then, the company won’t use the vegan term.

Today, Porsche uses a process called “OLEA” for tanning the leather used in the Taycan. This process uses olive leaves.

Earlier this week, Porsche announced it will integrate Apple Music into the Taycan, the first time the music streaming service has been offered as a standalone app within a vehicle.

But Apple Music is just one of the many features in the infotainment system. The user interface is laid out to always show three main buttons: home, vehicle and messages. The messages feature lists notifications coming into the vehicle. The voice feature can also be used to read these messages out loud.

Other buttons on the central screen include navigation, phone, settings, climate, news, calendar, charging information, weather and Homelink, which can be used to open the owner’s garage door.

Cruise can now give passengers rides in driverless cars in California