The UK, German and Italian economies are all tanking at the same time - Josh Loe
Skip to content 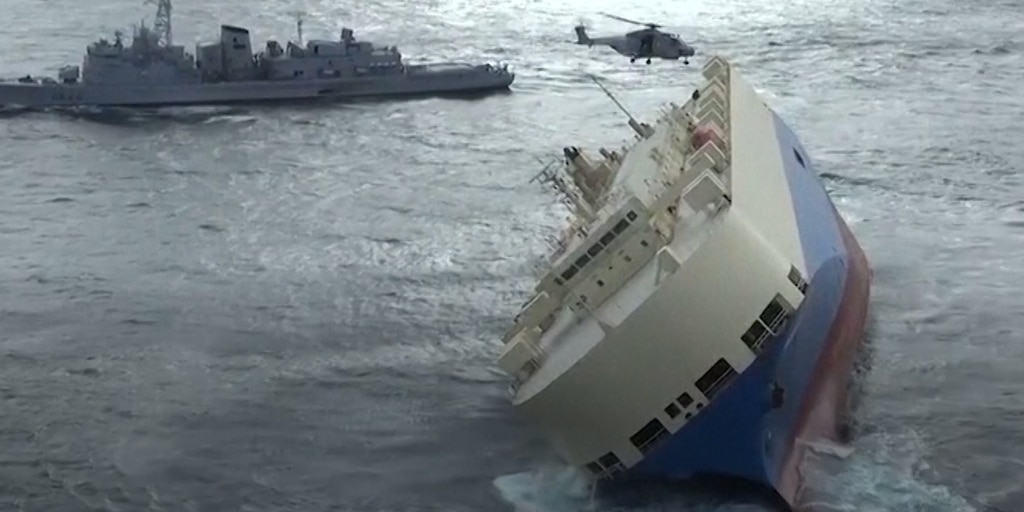 Eurozone growth looks “dire” in the second quarter, Pantheon Macroeconomics said in a report on July 22, “primarily thanks to a crash in German growth.”

The economists see “elevated risks of outright falls in Italian and German GDP,” despite the “resilient” economies of France and Spain.

Outside of the eurozone, but not yet out of Europe, the UK is stumbling as well. The National Institute for Economic and Social Research, said that uncertainty surrounding the decision to leave the EU three years ago means there’s a one-in-four chance the economy could already be in recession. 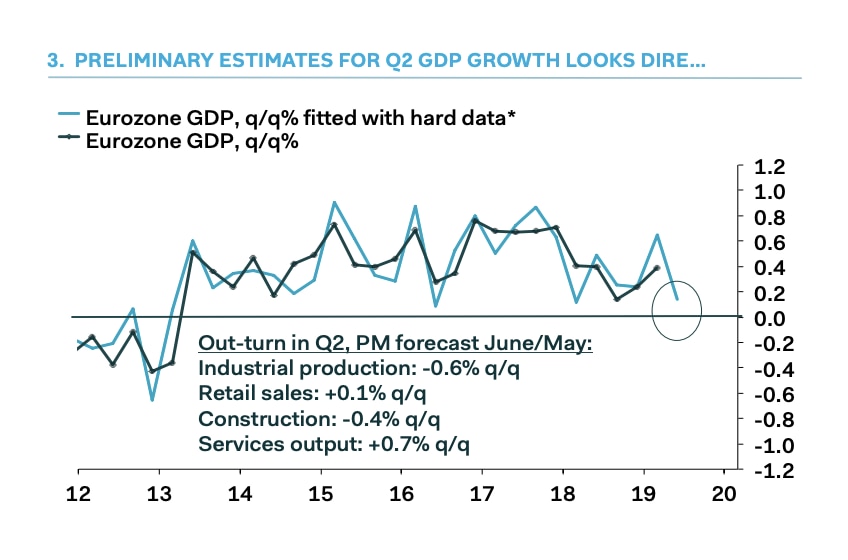 Since the end of last year, the German manufacturing sector has performed poorly and is “effectively in a recession,” Pantheon Macroeconomics says.

There are other warning signs. German companies are now putting their workers on “short time.” The Financial Times, citing the Ifo Center for Macroeconomics and Surveys, reported: “German industrial weakness is now beginning to leave its mark on the country’s labor practices,” with “more and more companies seeking to curb their wage costs by reducing employees’ working hours — a sign of emptying order books and slowing output.”

Read More: Germany, the backbone of Europe’s economy, ‘hit a brick wall’ in the second quarter 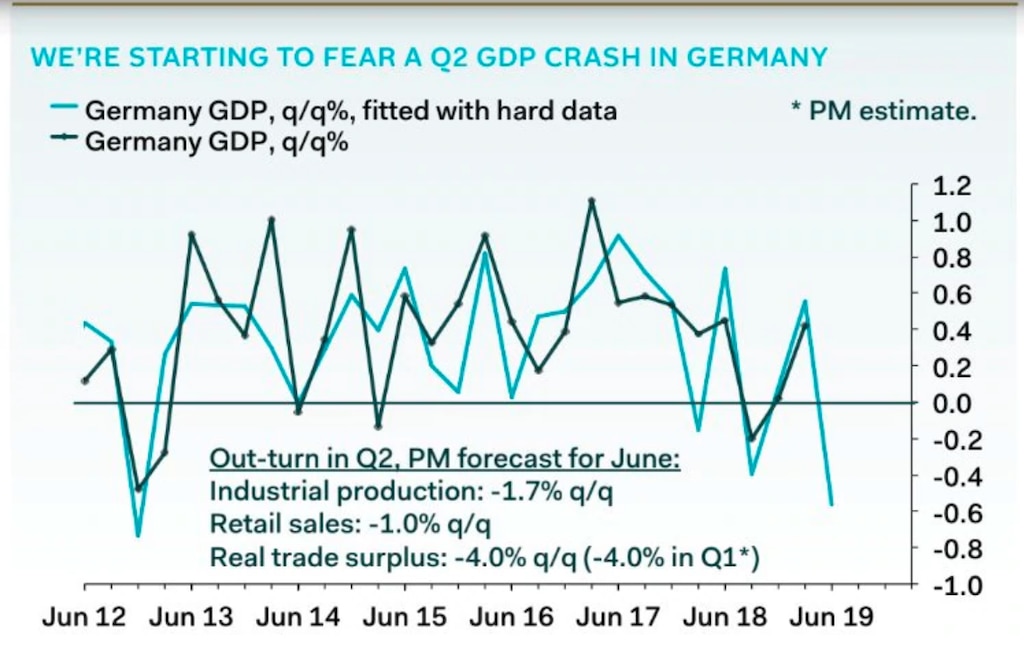 Italy’s debt is a huge problem

While labor data “will weaken in the second half of 2019,” he said in a separate note on July 16. 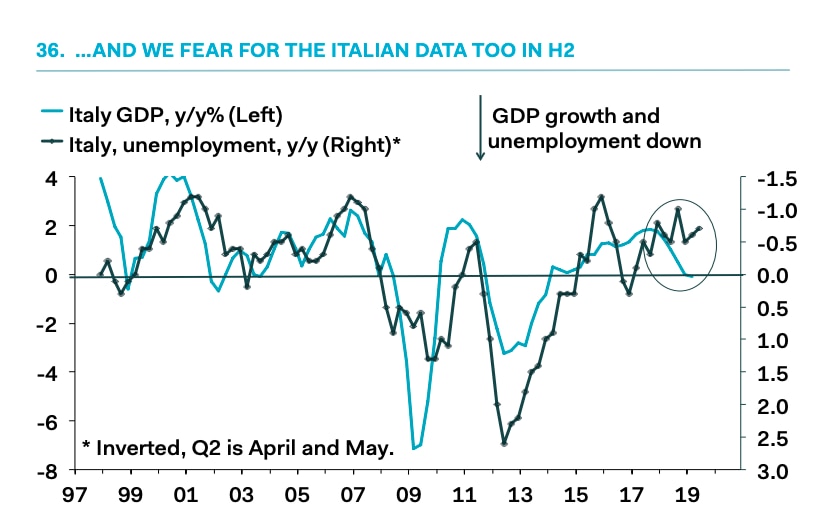 See More: Italy’s ‘perma-recession’ could trigger a €2 trillion financial crisis that threatens the eurozone itself

However, it is debt that is one of the real issues. It currently stands at about €2 trillion ($2.25 trillion). Debt to GDP has reached 130%, a level not seen since World War II.

Jack Allen, an analyst at Capital Economics, told Business Insider back in April that the public debt ratio will probably continue rising and eventually prove unsustainable.

“This would be a bigger problem than the previous euro-zone crisis and could once again endanger the single currency itself,” Allen said.

And then there’s the UK

Read more: The UK might already be in a recession — before even leaving the EU

Britain’s new Prime Minister, Boris Johnson, will have the challenge of tackling leaving the EU, which will likely cause decline in the economy whatever the deal.

And given that Johnson, in the run-up to being elected leader, said that Britain would leave the EU “do or die,” “no deal” scenarios are now more likely.

NIESR says: “In an alternative, orderly no-deal scenario, we would expect GDP growth to fall to zero in 2020, and CPI inflation to rise above 4%.” 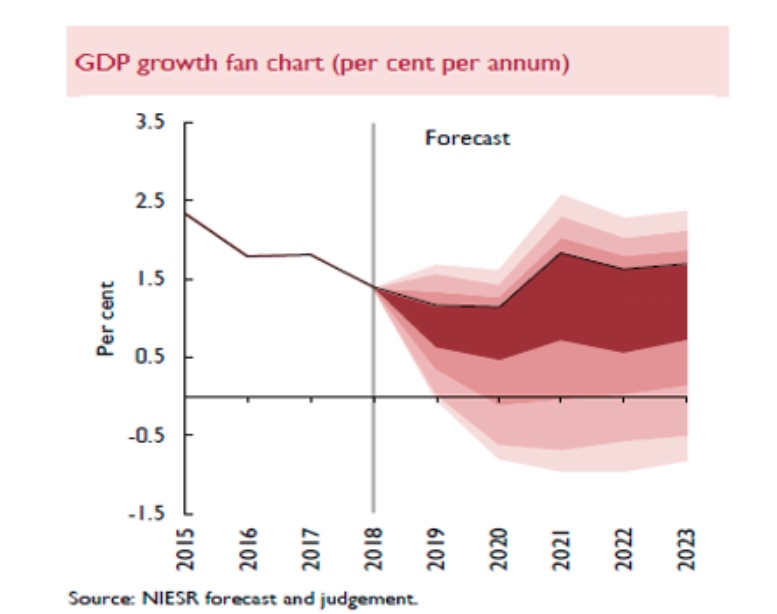 How to Use Email to Boost PR and Sales

How to Succeed In Business by Thinking Like an Outsider