Nissan has turned its old Leaf batteries into an off-grid camping companion.

The automaker’s Nissan Energy subsidiary worked with camper manufacturer Opus to create the ultimate “smart” pop-up trailer that integrates cells recovered from its first-generation electric vehicles to provide off-grid power. Add in one to two recharges of the accompanying 400W solar panel accessory and campers can listen to tunes and use their smartphones and other devices, including a microwave, for about 7 days, the companies said. The battery pack can be recharged by the solar panel in 2 to 4 hours.

The Nissan x OPUS concept camper debuted this week at the The Caravan, Camping and Motorhome Show in the UK. Inside the smart camper — code for LED lighting and USB sockets for charging — is a veritable glamping wonderland. You can almost smell the pour-over coffee.

Unlike many other concepts that debut at auto shows, components of the Nissan x OPUS are actually coming to market. The Air Opus is already available with a base price of £15,995 (a bit more than $20,000). The Nissan Energy ROAM product will launch in European markets later this year. Pricing for the ROAM wasn’t immediately available.

This isn’t the first time Nissan’s ROAM unit has shown up in a concept product either. It was featured earlier this year in Nissan’s NV300 concept van designed for woodworkers. Nor is this Nissan’s first foray into the secondary battery market. In November, Nissan launched Nissan Energy to create an ecosystem for owners of its electric vehicles. The idea is for owners to be able to connect their cars with energy systems to charge their batteries, power homes and businesses or feed energy back to power grids. The company said at the time, that it will also develop new ways to reuse electric car batteries. 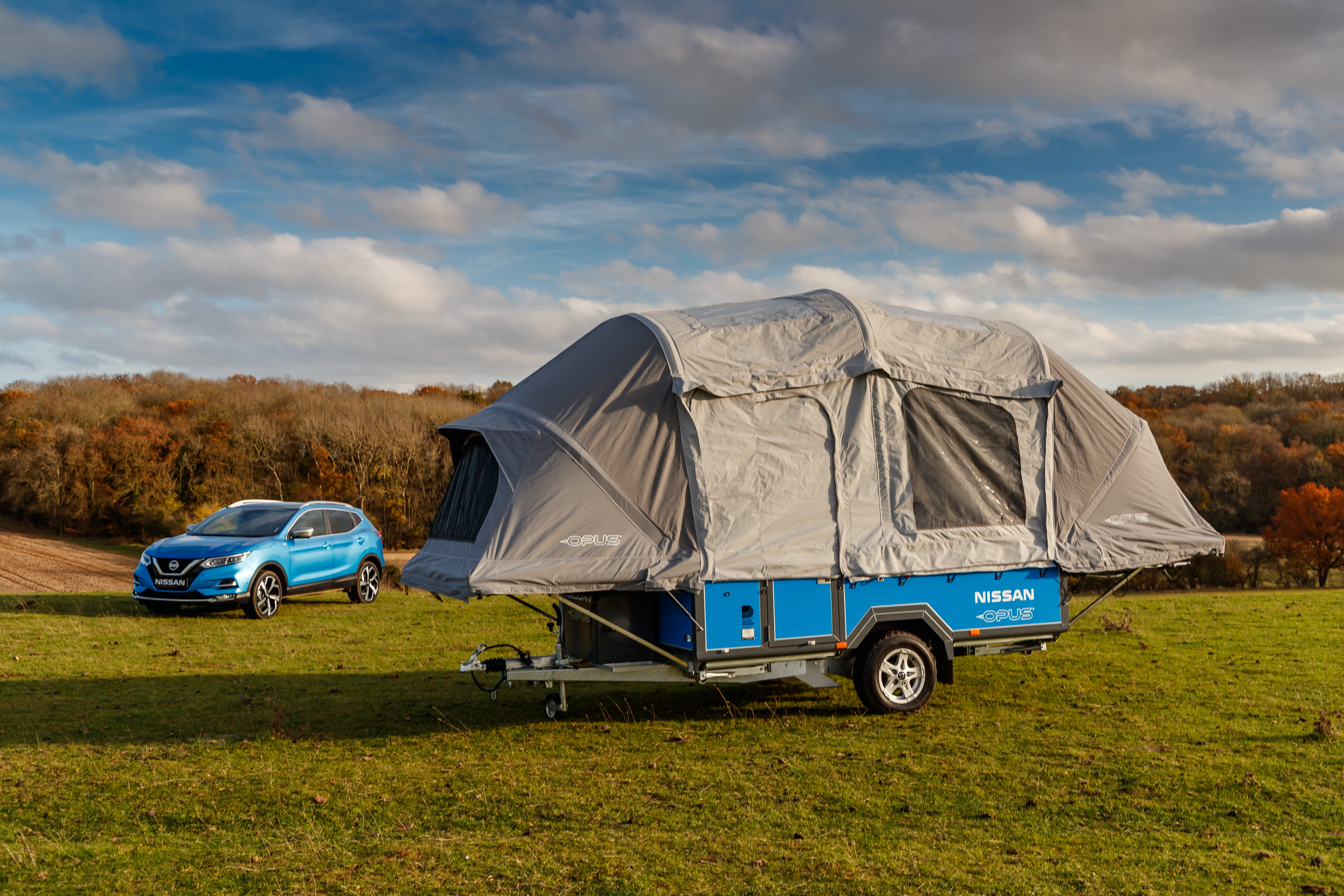 “The Nissan x OPUS concept is a real-world example of how Nissan Energy ROAM can integrate into our lifestyles – in this case the hugely popular leisure activity of camping,” Nissan Energy managing director Francisco Carranza said in a statement.

The concept pairs the Air Opus, a novel off-road pop-up camper that inflates in 90 seconds, with Nissan Energy’s portable power pack called ROAM. The ROAM unit is mounted in a special compartment at the front of the camper, where it can provide a power supply to both the 230-volt circuit and the 12-volt circuit. The battery pack can also be removed and recharged via a standard 230v domestic socket, or by plugging into a solar panel accessory.

The ROAM unit has a storage capacity of 700Wh and a power output for 1kW. That’s enough power to keep smartphones charged and the lights on. The Nissan x Opus camper has a 230v outlet, USB sockets, a 4G mobile WiFi hotspot for up to 10 devices; and even a digital projector with pull-up screen to watch movies. There’s also a 230v portable microwave and a two-burner gas stove and a fridge.

You can watch the marketing video here.

AR will mean dystopia if we don’t act today