Graph databases have always been useful to help find connections across a vast data set, and it turns out that capability is quite handy in artificial intelligence and machine learning too. Today, Neo4j, the makers of the open source and commercial graph database platform, announced the release of Neo4j 3.5, which has a number of new features aimed specifically at AI and machine learning.

Neo4j founder and CEO Emil Eifrem says he had recognized the connection between AI and machine learning and graph databases for awhile, but he says that it has taken some time for the market to catch up to the idea.

“There has been a lot momentum around AI and graphs…Graphs are very fundamental to AI. At the same time we were seeing some early use cases, but not really broad adoption, and that’s what we’re seeing right now,” he explained. 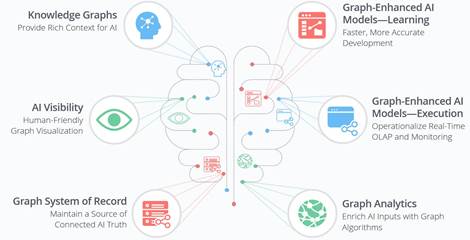 To help advance AI uses cases, today’s release includes a new full text search capability, which Eifrem says has been one of the most requested features. This is important because when you are making connections between entities, you have to be able to find all of the examples regardless of how it’s worded — for example, human versus humans versus people.

Part of that was building their own indexing engine to increase indexing speed, which becomes essential with ever more data to process. “Another really important piece of functionality is that we have improved our data ingestion very significantly. We have 5x end-to-end performance improvements when it comes to importing data. And this is really important for connected feature extraction, where obviously, you need a lot of data to be able to train the machine learning,” he said. That also means faster sorting of data too.

Other features in the new release include improvements to the company’s own Cypher database query language and better visualization of the graphs to give more visibility, which is useful for visualizing how machine learning algorithms work, which is known as AI explainability. They also announced support for the Go language and increased security.

Graph databases are growing increasingly important as we look to find connections between data. The most common use case is the knowledge graph, which is what lets us see connections in a huge data sets. Common examples include who we are connected to on a social network like Facebook, or if we bought one item, we might like similar items on an ecommerce site.

Other use cases include connected feature extraction, a common machine learning training techniques that can look at a lot of data and extract the connections, the context and the relationships for a particular piece of data, such as suspects in a criminal case and the people connected to them.

Neo4j has over 300 large enterprise customers including Adobe, Microsoft, Walmart, UBS and NASA. The company launched in 2007 and has raised $80 million. The last round was $36 million in November 2016.