Metro Bikes started out as a luxury bike rental service in 2014 — initially as “Wicked Rides” — and it launched scooters (motorbikes) and other two-wheel rentals in 2016. Now, the company is rebranding to Bounce and refocusing its business to on-demand scooter (that’s motorbike in U.S. parlance) rentals for first and last mile transportation. The idea is to appeal to commuters, who can pick up a bike at their nearest location and later leave it at an endzone. The cost is based on distance and time spent.

Bounce is currently present in Bangalore, where it has 2,000 scooters currently, and Hyderabad, where it has around 500. The plan is to increase those numbers but the company is waiting on a permit to operate electric scooters, once it gets that it will only deploy electric, CEO Vivekananda Hallekere told TechCrunch in an interview. Its current mix of vehicles also includes bicycles, electric bicycles and kick scooters available.

The startup is going to hone its focus on Bangalore and Hyderabad for now, with no new expansions for 6-10 months, he added. Looking further forward, Bounce is aiming to be nationwide by 2020, while Hallekere said he sees the potential for deployment in Southeast Asia in the future.

Bounce claims that it is currently seeing around four rides per vehicle per day on its on-demand platform, the company is targeting seven to twelve rides which it believes will bring it to a good level of revenue. Although Hallekere did stress that the core business is anchored in sustainability.

That’s down to the funding of the fleet, which the CEO said is financed by institutional investors who purchase the assets in exchange for a cut of revenue. That helps cover a significant portion of operating expenses, while in other cases Bounce works with OEMs who provide vehicles under similar terms. 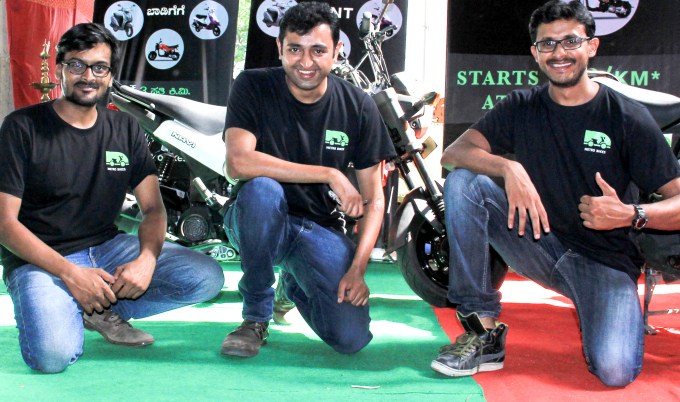 Bounce is entering a fairly congested market in India, with other startups include Wheelstreet — which TechCrunch wrote about earlier this year — ZipHop also competing with similar services. Hallekere, the Bounce CEO, said that the company’s history in the business and its technology can help it stand out.

Added to that, Bounce said it is working closely with authorities to help ease last mile congestion. For example, the company is one of a number to have a struck a deal with Bengaluru Metro Rail Corporation Ltd. (BMRCL) to put rental bikes at 36 metro stations. It also landed a deal with corporate to enable parking across the city. The company said it plans to pursue similar arrangements with metro operators in Hyderabad and other cities when it expands.

“The first mile and last mile are essential to having public transport work in India,” Hallekere said. “It’s very natural for Indians to go on scooters and we started with metro bikes keeping this in mind. We want to make an impact and enable people to ditch cars.”

Bounce is also looking to introduce a pooling service that would enable scooter owners to add their vehicles to the company’s fleet and make money when they are used.

Wingly is carpooling for private planes

The meaning of Nginx and F5