Oracle is learning that it’s hard for enterprise companies born in the data center to make the transition to the cloud, an entirely new way of doing business. Yesterday it reported its earnings and it was a mixed bag, made harder by changing the way the company counts cloud revenue.

In its earnings press release from yesterday, it put it this way: “Q4 Cloud Services and License Support revenues were up 8% to $6.8 billion. Q4 Cloud License and On-Premise License revenues were down 5% to $2.5 billion.”

See how they broke out the cloud revenue loudly and proudly in March, yet chose to combine their cloud revenue with license revenue in June.

In the post-reporting earnings call, Safra Catz, Oracle Co-CEO, responding to a question from analyst John DiFucci, took exception to the idea that the company was somehow obfuscating cloud revenue by reporting it in this way. “So first of all, there is no hiding. I told you the Cloud number, $1.7 billion. You can do the math. You see we are right where we said we’d be.”

She says the new reporting method is due to the new combined licensing products that lets customer use their license on-premises or in the cloud. Fair enough, but if your business is booming you probably want to let investors know about that. They seem to be uneasy about this approach with the stock down over 7 percent today as of publishing this article. 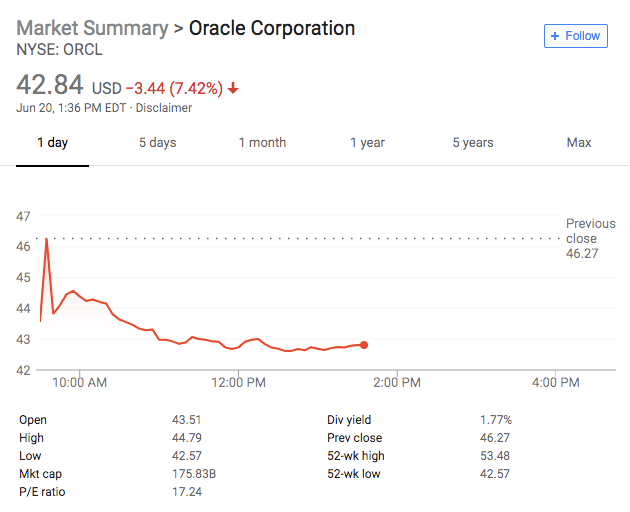 Oracle could of course settle all of this by spelling out their cloud revenue, but instead chose a different path. John Dinsdale, an analyst with Synergy Research, a firm that watches the cloud market was dubious about Oracle’s reasoning.

“Generally speaking, when a company chooses to reduce the amount of financial detail it shares on its key strategic initiatives, that is not a good sign. I think one of the justifications put forward is that is becoming difficult to differentiate between cloud and non-cloud revenues. If that is indeed what Oracle is claiming, I have a hard time buying into that argument. Its competitors are all moving in the opposite direction,” he said.

Indeed most are. While it’s often hard to tell exactly the nature of cloud revenue, the bigger players have been more open about this. For instance in its most recent earnings report, Microsoft reported its Azure cloud revenue grew 93 percent. Amazon reported its cloud revenue from AWS was up 49 percent to $5.4 billion in revenue, getting very specific about the revenue number.

Further you can see from Synergy’s most recent market share cloud growth numbers from the 4th quarter last year, Oracle was lumped in with “the Next 10,” not large enough to register on its own. 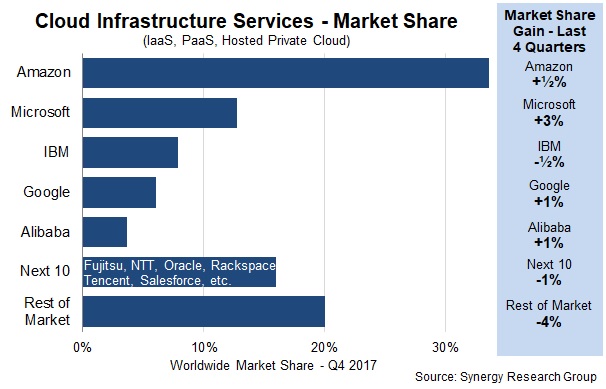 That Oracle chose not to break out cloud revenue this quarter can’t be seen as a good sign. To be fair, we haven’t really seen Google break out their cloud revenue either with one exception in February. But when the guys at the top of the market shout about their growth, and the guys further down don’t, you can draw your own conclusions.