Although the “pivot to video” has been notoriously challenging for most publishers, they can’t exactly give up on video. In fact, BuzzFeed has been ramping up production with a new editing tool called Vidder.

Vidder was created Senior Product Designer Elaine Dunlap and Senior Software Engineer Joseph Bergen. Dunlap recalled talking to Bergen more than a year ago and pointing out that while BuzzFeed is known for building its own publishing tools, “there wasn’t really the same opinionated software solution” for creating videos.

So they decided to build a video editing product that could be used by anyone, not just experienced producers and editors. Dunlap said the initial goal was to “demystify video production.”

“We basically started out with this hypothesis that if we gave a very simple tool to these editors who are constantly creating very funny, interesting things, they would really be able to fly,” Bergen added.

Fast forward to 2018 and BuzzFeed says Vidder is being used by 40 or 50 team members to create 200 videos each month, with 800 videos created in all since October. Almost none of BuzzFeed’s Vidder users are full-time video producers, and most of them had little to no experience with professional video editing software. 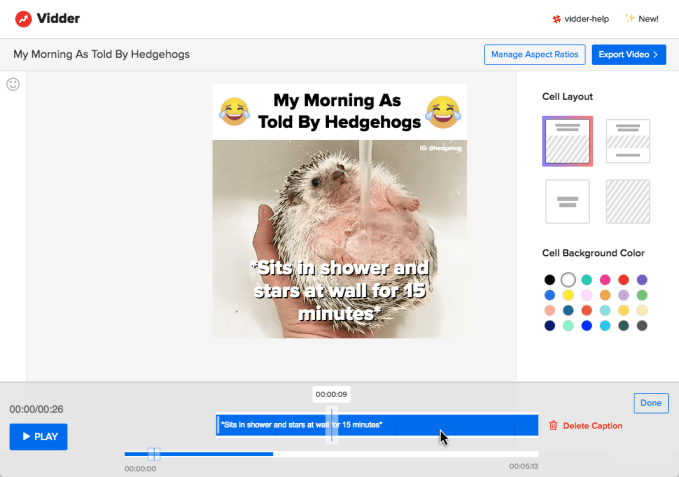 For example, Kayla Yandoli was a member of BuzzFeed’s social team (she’s since transferred to the video) when she created this compilation of “shady” insults from The Golden Girls last fall. With 1.1 million shares, it was one of Vidder’s early success stories, and Yandoli estimated that it only took her only an hour and a half to edit.

We moved even faster when the Vidder team demonstrated the product for me last week. We started with a basic template, then customized it by uploading one or two video clips, typing in captions and subtitles, adding emojis, and we had a perfectly serviceable video ready to go in just a few minutes.

The experience had very little in common with the hours I’ve spent fiddling with timelines in FinalCut. It also benefits from being entirely web-based, with no software download needed.

The key to Vidder is simplicity. As Product Manager Chris Johanesen put it, “We’re not trying to recreate Adobe Premiere.” There are teams at BuzzFeed creating more in-depth, highly produced videos, and Vidder isn’t built for them. Instead, it might be used by an editor like Yandoli who wants to quickly translate a regular BuzzFeed post into a video for Facebook or Instagram.

“There was a really big boom with Facebook videos around pop culture, animals, babies and stuff,” Yandoli recalled. “People on my team were interested in creating videos, but everyone couldn’t download Premiere. We were yearning to just find an accessible tool so that we could create things for our social platforms.”

And while you might think that Vidder has become less relevant with recent Facebook algorithm changes, Johanesen said the tool allows BuzzFeed to continue experimenting.

“Ever since the big Facebook algorithm changes that happened, our social strategy is less about longer videos and more about making things that will engage communities and conversations,” Johanesen said. “Vidder has helped teams move a little bit faster than might have been possible with other tools. I don’t know that we’ve cracked it, but it’s helping us make progress.”

BuzzFeed is also using Vidder to adapt videos for different platforms, like creating a shorter video for Instagram or compiling several short videos into a longer cut for YouTube. The tool is also being used by international teams who might quickly create a localized version when they see that a BuzzFeed U.S. video is doing well. In fact, BuzzFeed says one international editor was able to “clone” eight Vidder videos in an hour.

Usage is spreading beyond social media teams, with the sales team potentially using it to create “BuzzCuts” for advertisers.  And of course Johanesen and his team are going to continue working on the product — for example, they have plans connect it to a library of licensed content.

Indiegogo’s CEO on how crowdfunding navigated the pandemic

An Apple event, but with Bad Lip Reading