Visiting the Immersive arcade at the Tribeca Film Festival is always challenging. Every year, there are way more virtual reality and augmented reality experiences to try out (not to mention creators to interview) than I can squeeze into just a couple of hours.

This year, as always, I was only able to check out a handful of projects. They ranged from the serious and political to the playful and colorful — though even the playful projects were still exploring some ideas about creativity and human connection.

Terminal 3, for example, uses augmented reality to put the viewer in the position of an interrogator with airport security: You meet and interview a Muslim traveler, and you get to choose from different questions before ultimately deciding whether or not they should be allowed into the country.

Artist Asad J. Malik told me that as someone who grew in Pakistan, “I’m an expert on [airport] screenings, because I get screened a lot.” For Terminal 3, Malik interviewed real people (one of the options is an interview with Malik himself), though the person you see in front of you doesn’t appear photorealistic. Instead, they’re almost like a digital ghost who might gradually become more lifelike, depending on the questions you ask.

Malik said that he’s not trying to promote a specific political message about Muslims, except to illustrate the enormous variety of personalities, backgrounds and viewpoints among people who may or may not identify themselves as Muslims, but “who the world would identify as Muslims.”

Terminal 3 was created with support from Unity for Humanity and RYOT (a virtual reality-focused studio that, like TechCrunch, is part of Verizon subsidiary Oath). It’s built for Microsoft Hololens — not exactly the most popular platform at Tribeca, but Malik said it was crucial to his approach, because it allows the interview to take place against the background of the real room: “Suddenly this story, this person, it’s in your real space.”

Meanwhile, Lambchild Superstar: Making Music in the Menagerie of the Holy Cow makes no attempt to replicate a real environment. Instead, it takes place in a virtual world of dazzlingly bright colors, populated by animals who can be manipulated to make music — for example, a cow whose tail you can grab and reposition to change the sound made by his farts.

Lambchild Superstar is a collaboration between filmmaker Chris Milk and the band OK Go. OK Go’s Damian Kulash said they initially started out with the question, “What is an OK Go video in VR?” before deciding that was the wrong approach.

Something like the “Upside Down & Inside Out” video (which shows the band flying weightlessly) might seem like a good candidate for 360-degree video, but Kulash said it actually turns out to be “not really about the environment.” Instead, it’s presenting you with an experience in “a very controlled rectangle.” 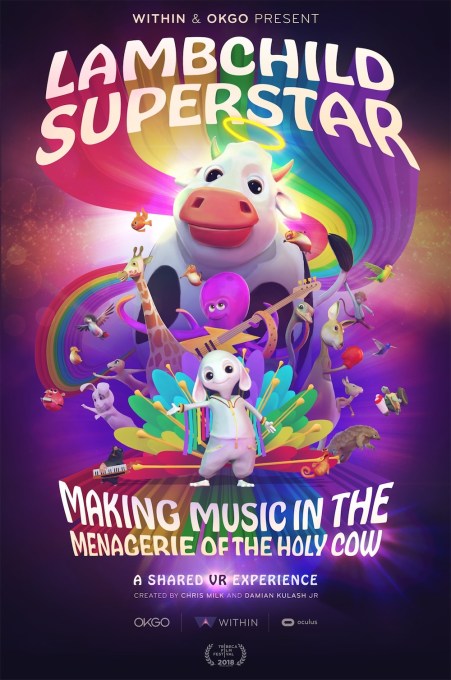 So Kulash and Milk decided to explore a different direction, namely allowing users to make create their own music.

“I got into my ridiculous rant about the kind of alchemy of music,” Kulash recalled. “You add one sound to another sound. and you come out the other side with this ball of joy and emotion. It’s just crazy: Where did that thing come from?”

But Milk noted that if you give most people a guitar or a piano, they might get intimidated, because they don’t know how to play it: “There’s a barrier there.” Hence the funny environment and animals; it feels more like playing a game than performing music, but you emerge at the end with a unique song.

And it’s a song that you’ve created with another user, which Kulash said was also a key part of the experience.

“Chris is a zealot about that, and for good reason,” he said. “VR can be an extremely isolating technology … but is there a way we can use that, rather than to isolate, to let you have the closeness of a more human experience? It’s a weird thing that we had to remove all the human iconography to do that.”

This year’s Tribeca Immersive is also unusual for being the first to include a couple of games, like Star Child, a platform adventure game from Playful Corp. Playful’s Paul Bettner said that like the company’s previous game Super Lucky’s Tale, Star Child uses 3D and virtual reality to try to breathe new life into a classic gaming genre, namely the platformers like Abe’s Oddysee.

Today is the final day of the Tribeca Immersive, so New Yorkers have one last chance to experience all these projects. But while you might have a hard time finding some of these projects outside a festival environment, Bettner intends to release Star Child as a mobile game as well. It might sound really tough to squeeze a VR experience onto a smaller screen, but apparently for Bettner’s team, it’s not.

“What I’m finding in VR is if we build the content a certain way, with a focus on doing third person VR, and we focus the entire project on just making it stand out and take advantage of what VR can do, then bringing it to what we call flatscreen platform is a much easier transition than the other way around,” he said.

Our.News fights misinformation with a ‘nutrition label’ for news stories