The making of a hardware founder - Josh Loe
Skip to content

Working in tech, it’s hard to avoid the many stories and congratulatory tweets about the latest company to close a funding round, and little wonder. It’s a milestone worth celebrating before getting back to work. Yet what’s happening in the trenches before those funding announcements roll out is often more instructive. How does one decide to make the leap in the first place? How do you mold a product or service into something that you can present to outsiders? How can you enlist people to help you when everyone you want to meet has more pressing demands on their time?

These are questions that many new founders wrestle with, including Sarah McDevitt, a college basketball star turned hardware founder whose product she hopes to have in consumers’ hands by this holiday season – even while she’s acutely aware that a lot has to go right first.

McDevitt didn’t anticipate being in this position five years ago when she was making a generous salary as a product manager at Microsoft, working a stone’s throw from where she’d grown up in Seattle. But like a lot of founders, McDevitt eventually felt compelled to start her now two-year-old company, Core Wellness, which aims to sell meditation experiences.

We checked in with her this week about how far along she has gotten, the obstacles she wasn’t expecting, and where she goes from here.

TC: You played college basketball at NYU, where you also studied math and computer science. Which was more fun?

SM: [Laughs.] In high school, I used to walk to a gym that was open at all hours of the night and play until my parents were like, ‘You have to come home.’ But I’ve always loved math and education, too.

TC: When you graduated, you went home to Seattle to work for Microsoft for five years. How did you get from there to launching a startup that makes it easier for people to meditate?

SM: I spent my last year at Microsoft on its social responsibility team, working on global education initiatives, and on work trip, I visited a university in South Africa that was incorporating meditation into its curriculum. I was amazed at the effects that meditation had on this student population that had endured in some cases extreme poverty and violence. It was really eye-opening to me.

I soon discovered Stanford’s learning design program and it was the thing that I was looking for. I knew I wanted to study stress and what happens in our bodies and how meditation and mindfulness can combat it. I still feel lucky that I got in.

TC: Did you want to teach about meditation or did you head to Stanford thinking you wanted to start a company?

SM: I thought I’d design something for high school districts to address mental well-being for teenagers. For my master’s thesis — which had to be a design project — I’d designed a kind of mini curriculum for high school students that any high school teacher could implement. That’s what led to the idea of Core. I thought it might be hard for teenagers to buy into meditation without meaningful bio feedback, which is at the root of what we’re building. I’d also started thinking about using a physical object that could help younger students practice mindfulness.

But the more research I did, the more I realized that adults really struggle with meditation. And when you look at how stress affects our brains and bodies, it’s clearly something we should be addressing. I wanted to see if I could create something that applies to adults as well. 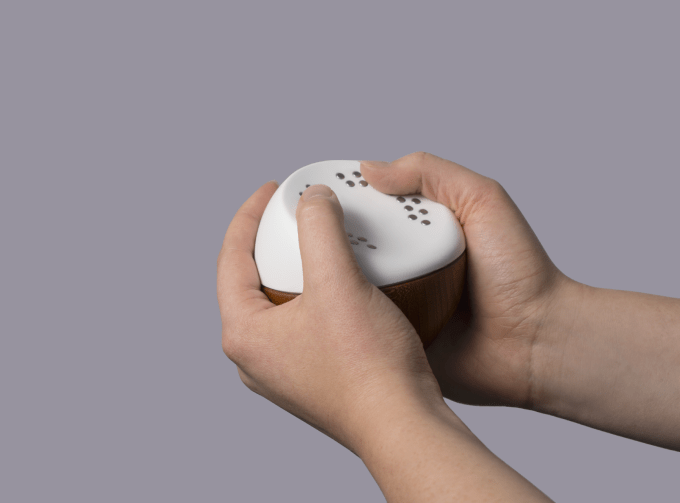 SM: Looking for a cofounder. I knew I wanted camaraderie. But I didn’t have anyone who was in on this idea with me, so it was like finding someone to marry without dating them. I posted on collaboration boards at Stanford about the skills I was looking for — electrical engineering, app development for an early prototype. I figured I’d find someone with the skills, then work with that person for a few hours a week and see how things went.

TC: You found that person, Brian Bolze, who is also Core’s head of product. Did you know it was a fit straightaway?

SM: We had coffee and really vibe’d on our worldview and mindset around mediation and the kind of brand I’d wanted to create. Then we started working together, five hours a week, then 10, then 20. Then suddenly, it was like, ‘Hey, so are you going to stay in school?’ He eventually took that leap, and I’m incredibly thankful to have him. I think the emotional partnership is just as important as having a skills match.

TC: Core is making both hardware and software. What was building that first hardware prototype like?

SM:  We started by using hobbyist materials like Arduino, and we used Stanford for 3D printing access and a hardware maker space that’s now out of business. I was also networking constantly through my Stanford classmates and previous coworkers, saying, ‘I’m looking for help with PCV manufacturing.’ or ‘Do you know someone who has invested in hardware before and can help us out.’

I was asking for a feedback as a way to get meetings. I did that a ton. Then we just started working on a prototype that was just functional enough to put in users’ hands and get feedback. The same was true with our business model. We’d ask for feedback from Stanford professors who’ve invested before, contacts I’d made, angel investors.

TC: You’ve raised a tiny bit of funding so far, from the hardware-focused venture firm Bolt and Bose, the speaker and headphones company. Can you talk about how that came together?

SM: Kate McAndrew, [a VC at Bolt] runs these women-in-hardware meetings and that’s kind of how I found my way into the community. My previous contacts were in software, so I went to her meet-ups to learn about the hardware business and eventually, over nine months, when she thought we were finally in a place to pitch Bolt’s partners, we did that.

TC: You’re based in San Francisco. Can I ask how, before you raised a bit of funding, how you were supporting yourself?

SM: Once we’d begun work on prototypes, we’d raised a friends-and-family round that we used to pay for industrial design help. Working at MIcrosoft, too, I’d saved a bunch of money. I didn’t necessarily have a reason why at the time but I naturally [spent] less than what I was making, knowing I wanted to enable myself some freedom. Grad school was incredibly expensive, but I did still have some savings I could live off for the first six months or so until we raised that family round.

TC: Were your friends and family receptive?

SM: It was really challenging for me personally. To go to people with this really new idea that has pretty much no validation and ask for money was hard. I did learn through that process there are a lot of people who want to support you, and a little bit from a lot of people adds up. It was enough to get to the point where we had functioning prototype.

TC: How far away are you from selling to your first customer?

SM: In two months, we’ll have an exclusive public launch. We’re making a couple hundred meditation trainers with the goal in mind of finding our “core” tribe — people who love Core, latch onto it and keep coming back. Once we sell that and have that engagement data, we’ll go raise a seed round.

TC: This is a hardware product and subscription software. How much will you charge and how does it work?

SM: We’re charging $199 [for the handheld trainer], along with a monthly subscription with personalized content. We’ll also be launching virtual meditation classes so that you can check in with live instructors and feel connected to a community of other people meditating with you.

SM: By using data to recommend to you content that we know will be effective for you. The first step [in meditation] is to turn your attention to one thing; we’re helping you do that by giving you this grounding, comforting object with a pulse that guides you through breathing exercises and technique.

As for personalized recommendations, if you’ve been a user for a while and we see [based on biosensor data] that a body scan technique has been effective, we might say in the app, ‘Hey, this, four-minute body scan has been really effective in reducing stress so let’s try this today.’

TC: How much seed funding do you hope to raise?

SM: We’re targeting $4 million, most immediately to fund a holiday launch and enter the market.

TC: And if you miss that window?

SM: I don’t think we need to wait for another. There’s huge demand for help with meditation.

TC: And you’ll be selling exclusively through your site or are you talking with possible distribution partners?

SM: We’re partnering with yoga and fitness studios on events and experiences and meditation stations. We also have some pop-up experiences planned with brands in the Bay Area.

SM: First, I will say that the hardware community is extremely helpful and collaborative, unlike the world of enterprise software, which is pretty cutthroat and where people are more closed off to helping others. We’ve gotten so much help from other founders.

Still, you’re right. As one example, we were getting our electrodes from a prototyping shop in China, and they have to be stainless steel 304 to be conductive. When they sent the electrodes to us and they weren’t working, we did all this variable isolation before eventually figuring out that they’d used a different metal alloy. When we told them, they were like, ‘Yeah. They’re stainless steel 304.’ [Laughs.] It was a bad setback, but now metals testing happens much earlier in the process, and we might not have thought of that being a necessary step otherwise. You also learn the importance of a timeline buffer for things like that to happen.

TC: Are you meeting with investors yet?

SM: I’m out networking. We’re not fundraising yet, but we’re having the right conversations. That way investors are aware of what we’re doing and that we’re coming.

How startups can make influencer marketing work on a budget